"Water is for Fighting Over" 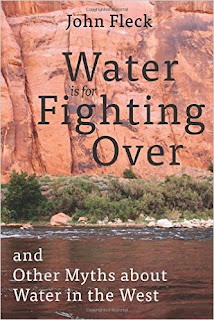 That's the title of John Fleck's new book about the Colorado River.

And it's true. Water is an issue in the western US unlike anything the eastern US can understand.

I never understood it until I moved to the west.

Droughts can be devastating -- in the southwest, or California, or Oregon. Farmers suffer terribly in droughts, and fires burn in droughts.

Cities in the West -- Las Vegas, Phoenix, Los Angeles, and more -- are literally built on the water they have arranged to have delivered to them.

Take away their water, and these cities will cease to exist in short order.

What they get is not natural water -- not water that would flow to them anyways -- but water produced only by the machinations of man. And, people are starting to think, it's not water that is always going to be guaranteed.

If you live in the west, or if you want to understand the west -- the Sun Belt and the Pacific Northwest -- you have to first read Marc Reisner's 1986 book Cadillac Desert. It will open your eyes to the aquatic Disneyland that has been create here.

Fleck is an optimist about water in the western US.

I haven't read John's book yet -- just ordered it -- but my impression so far, based on some good reviews his book has gotten, is that it is probably the followup to Reisner's book that people have been waiting for 30 years.

Disclosure: I've known John for several years, first as a blogger covering climate for the Albuquerque Journal, then as he transitioned to water issues in the southwest. I've had dinner with him a few times in Albuquerque, when I was back there for family business. (I was an undergraduate at the University of New Mexico.) I like him a lot, and am looking forward to reading his book, which I know he certainly worked hard on. And its has impressively already gotten him appointed as the Director of the UNM's Water Resources Program.

I'll write more after I read his book.