NASA: Hubble May Have Detected Water Plumes on Europa

NASA just held a press teleconference (images) where they announced the possiblity of the detection of water plumes spurting from the ice on Jupiter's moon Europa. (They did not announce the discovery of life, or anything close to it, as some media irresponsibly speculated after NASA's announcement of today's teleconference.)

It's not a definite discovery. They observed Europa transiting in front of Jupiter -- an idea from what's being done with exoplanets -- in the UV, and on 3 of 10 transits saw evidence of water vapor from water plumes off Europa's southwest limb:

It's the green flares at about five thirty to nine o'clock that represent the possible plumes. Seeing this evidence on three times out of ten means the plumes may be intermittent.

If true, this could be significant, because it means access to Europa's ocean -- which is global, saline and beneath miles of ice, and could potentially host life -- would be available near the surface, without having to drill through miles of ice (which, on a foreign moon, only looks easy in the movies).

Here's an artist's interpretation of one possible scenario: 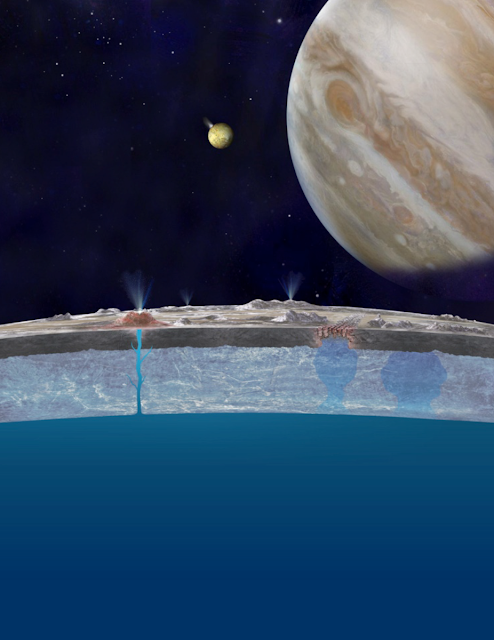 I guess you could call these Europaean fistules. But plumes sounds better.

The surface tempeature of Europa is about -160 C (-260 F) at the equator and no higher than -220 C (-370 F) at the poles. So any water is going to instantly freeze. I guess the idea is to look for signs of life -- or at least organic compounds -- in the refrozen surface ice. Unless the plumes are huge and powerful, that's going to limit any detected life to microbes and not alien tuna.

Here's another scenario that was presented, expanding on one section above, which looks more amenable to finding tuna: 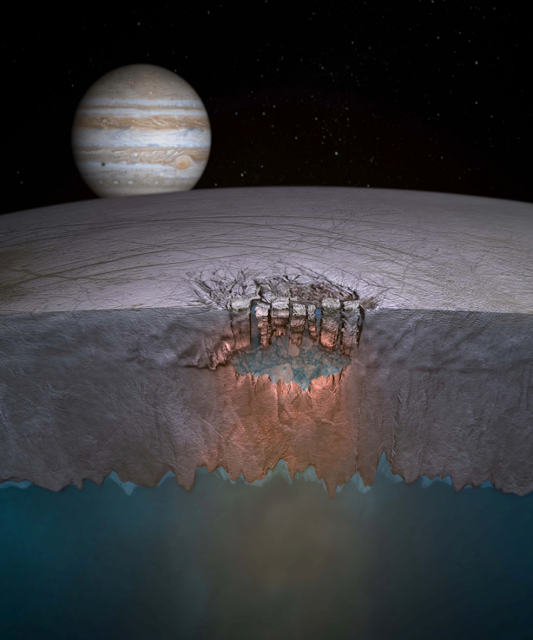 A paper is coming out soon in the Astrophysical Journal -- I'll try to remember to link to it.

The scientists said they were stretching Hubble's capabilities to the limit, so this isn't a definite discovery, and they "remain cautious."

Finally, here's another image that was presented, with a self-explanatory caption: 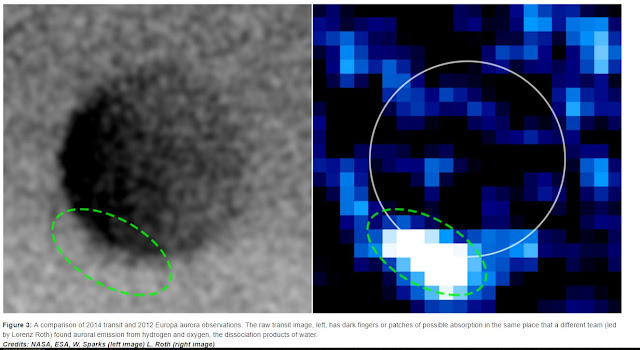