The monthly ENSO forecast for the next several months is out from the Climate Prediction Center/NCEP/NWS and the International Research Institute for Climate and Society at Columbia University.

Upshot: They think the chance of a La Nina this fall and winter has fallen below 50%.


The multi-model averages favor borderline Neutral-La Niña conditions (3-month average Niño-3.4 index less than or equal to -0.5°C) during the Northern Hemisphere fall, continuing into winter (Fig. 6). However, the more recently updated model runs from the North American Multi-Model Ensemble (NMME) more strongly favor ENSO-Neutral (Fig. 7). The forecaster consensus prefers this outcome, which is supported by the lack of significant anomalies in several indicators over the past month (winds, convection, subsurface temperatures). Overall, ENSO-Neutral conditions are slightly favored (between 55-60%) during the upcoming Northern Hemisphere fall and winter 2016-17 (click CPC/IRI consensus forecast for the chance of each outcome for each 3-month period).

(emphasis mine.) Here the La Nina probability is in blue: 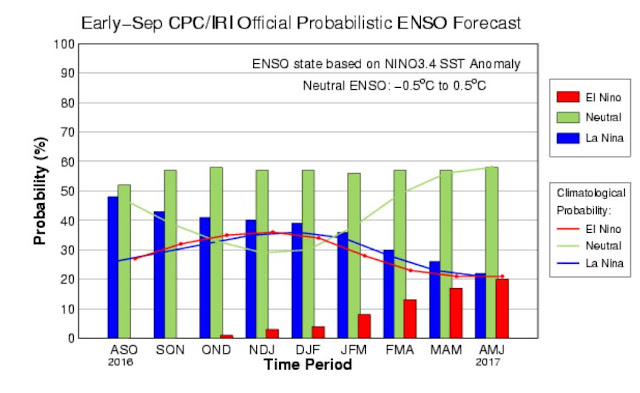 Why does this matter? Well, it's inherently interesting, since La Ninas usually follow El Ninos. And, even though a natural fluctuation (up or down) says nothing about climate change, it would take away a talking point of those who think cooler temperatures are on the way. As Eli once said, somewhere, there is so much horseshit flying around that you almost want to see warming just to shove it in their faces. (That might not have been his exact wording; apologies if not.)
Posted by David Appell at 9/08/2016 11:39:00 PM

It is not my field, but are you sure La Nina's followed El Nino's? I only heard this kind of meme from mitigation sceptics, which is not a reliable source, and thought it was just in half of the cases and in the other half neutral.

Well Victor mine it is even less, I'm no more than a spectator:
http://www.esrl.noaa.gov/psd/enso/mei/ts.gif