Ice Loss Since 2002 Greater than Mass of Mars' Moon Phobos

While Arctic and Antarctic sea ice have increased compared to last year, the trends are still very much downward. Based on the data I've found, the ice loss since 2002 for Arctic sea ice volume, Greenland mass balance, and Antarctica mass balance is larger than the mass of Mars' moon Phobos. 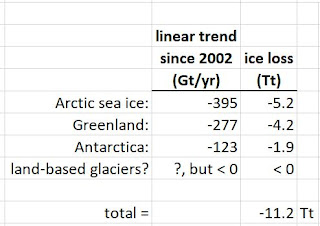 I haven't looked up the mass balance for land-based glaciers, but surely it's less than zero.

That it’s equal to the mass of ANY moon is pretty amazing, IMHO.