US Attorneys: The US Isn't Contributing to Climate Change 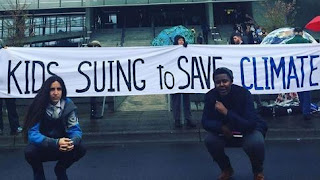 You may have heard of the lawsuit filed by 21 children in 2015, many of them from Oregon, alleging that climate change violates the rights of future generations. (Specifically rights granted under the  9th Amendment, which says that the rights granted in the Bill of Rights are not necessarily the only rights retained by the people.) The case been winding its way through this court and that, and I haven't really kept up with all the details except to know the case still hasn't been spiked.

The U.S. government wants, of course, to have the case dismissed, and has tried various arguments to accomplish that. Their latest attempt, presented in the District Court in Eugene, Oregon, is interesting: that the climate change problem is real, but it's global and so outside of the hands of the U.S. From the Courthouse News Service:


"In oral arguments on Wednesday, U.S. Attorney Frank Singer acknowledged that some of the injuries the kids claimed they have suffered, like the flooding of their homes during hurricanes or asthma from polluted air, may indeed be traceable to climate change and could give the kids standing to bring their lawsuit.

"But Singer claimed that the government couldn’t possibly manage to resolve what amounts to a global problem, saying U.S. action alone can’t return the planet to the 350 parts per million of dissolved carbon dioxide in the atmosphere that scientists have deemed to be the safe threshold."

I wonder if the White House knows its own lawyers are admitting that climate change is real and serious.

The US attorney actually went farther than that:


“The United States government doesn’t force people to drive their cars or command them to ride in planes,” Singer said. “It’s a matter of arithmetic. It is really third parties that are contributing to this. It is not the United States. And so this case fails.”

That doesn't strike me as a very intelligent argument; in fact, it's obviously wrong, as the US has contributed more than any other nation to the problem, in terms of cumulative CO2 emissions.

Maybe lawyers just throw arguments against the wall and see what sticks.

I doubt these kids (many now college-aged) will win this suit, in the end. Some judge will find a way to throw it out, and the Supreme Court finally will, if necessary.

But it's interesting because you to have to think there are going to be a great many lawsuits coming in the next half-century, as coastal cities start to go underwater and people start to lose homes on the coast. Such losses won't be so theoretical and will have actual dollar values attached to them. Homeowners and the banks who finance their mortgages aren't going to just walk away from, say, a million dollar home on the beach -- they're going to argue climate change isn't their fault and they want reimbursed for their real, tangible loss. Who's going to get stuck holding the bag? It'll be a game of climate musical chairs. I doubt taxpayers will fare well in those attempts to seek justice.

The 2006 decision in Northwest Environmental Defense Center v Owens Corning established the principle in the 9th Circuit that, under the Clear Air Act, an ordinary citizen has standing to sue for damages caused by Global Warming.

As a practical matter, this is a dreadful legal precedent. The tort liability system is an awful way to set our country's policy regarding carbon dioxide. Court cases cannot be expected to reasonably balance the science, the uncertainty, and the costs and burdens to people living today.

As a legal matter, the decision is dreadful, because it ignores magnitude. The amount of potential harm that a particular set of CO2 emissions might do to a single individual is unimaginably tiny. One way to see that would be to express certain emissions in terms of additional warming in year 2100. If tort liability can apply to such minuscule harm, then virtually any action or inaction is grounds for a lawsuit.