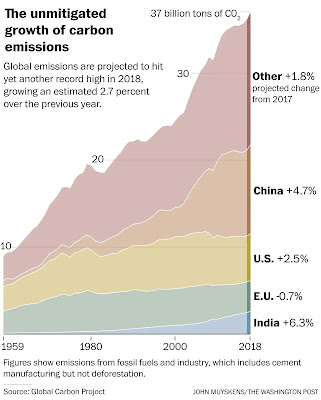 That is, indeed, not good news. It's a fairly big number. It will deflate a lot of hopes.

WaPo plays coy with their source material, but it's this paper in Earth System Science Data. (Which is at least open access.)

Why the increase? Part of it is the increase in US CO2 emissions that I wrote about earlier, running about 1%. Part of it is about China's increased emissions. And then India's too. These Big-3 cover most of what's going on.... After a quick read, I don't see where they give the recent annual increases by country, but I might change my mind after a 2nd reading with fresh eyes.... I hope I'm wrong about this, but if not they've been irresponsible.

The problem is that from 2013-2015 global CO2 emissions seemed to be flat. People misattributed this (apparently) to a permanent decrease in global burning of fossil fuels, but that was clearly not true when the year-over-year increases in 2017 were 1.6% over 2016's value.

Then the yellow jackets in France are protesting higher fuel prices due to carbon taxes. I think a carbon tax-and-dividend would handle this nicely, and even alleviate poverty, but no politicians have enough foresight and bravery to offer one. So it's no surprise they are going to get pounded on such taxes.

How can these emissions be calculated so exactly? Because oil, natural gas and coal cost money!, and these billings from large companies are relatively easy to add up. And because carbon people have a pretty good idea of how land use changes -- like turning a forest into a field, or building in a city -- count towards carbon emissions. I'm sure it's not easy work, but it's not especially complicated, either.
Posted by David Appell at 12/05/2018 10:04:00 PM

The rise in the rate of change for global CO2 PPM seems fairly linear. At this rate, we'll be increasing at about 4.5ppm/year by the end of the century and reach a little less than 700 ppm CO2. That would be about 2.5x the preindustrial level of 270 ppm.

There goes any hope of achieving the Paris targets.

This result should not be surprising. People are not willing to impoverish themselves today because of some hypothetical threat a hundred years from now. The toothless Paris Accord shows that. Furthermore, the carbon-reducing steps taken by France are nowhere near sufficient to stop the increase of atmospheric CO2. To actually cause the % of atmospheric CO2 to start decreasing would require unthinkable actions.

We should end the plush international meetings and stop using climate change as an excuse to give governments more power. Instead, we should focus our resources on things that could really help
-- finding a new source of energy that could replace thw worldwide use of carbon-based fuels at a comparable cost.
-- Adapting to warmer temperatures and rising sea levels
-- Geo-engineering

DiC, how well do you think that geo-engineering will go? That requires a large international collaboration, where all agree that this will be done...even though some countries will be major losers in that endeavor.

I'd call that even more unimaginable than reducing our CO2 emissions.

Marco - you may be right. I also worry about conceivable unintended side effects of geo-engendering.

You call the Paris Accord "toothless." How would you make it toothful (if that's a word)?

Wind and solar are now, in some locations, at price parity. Think the fossil fuel companies in these places will just fold up their tents and go home? Of course not -- it's going to require government intervention, and it's past time to start.

"It's now cheaper to build a new wind farm than to keep a coal plant running," CBS News, 11/16/18,
https://www.cbsnews.com/news/its-now-cheaper-to-build-a-new-wind-farm-than-to-keep-a-coal-plant-running/

David, why should uncertainties mean we can't react?

You don't do that in real life. I don't either. Neither does the government. Nobody does. So why does climate science have to have exact answers (which will, of course, never happen, or happen far far too late to prevent serious climate change).

David, why do banks require insurance against fires when it's uncertain when or if they will occur?

In summary, we know is that more action to prevent global warming is better than less action, but that principle gives us no guidance as to how much to sacrifice.

It is a good point. We don't know precisely the cost of carbon emissions. There is uncertainty in each step, from the physics through to economics. Investing too quickly or too slowly will cost us.

There is a large range of estimates for social cost of carbon. The extremes range from 0 £/tC to over 1000 £/tC.

Chances are the true value is somewhere in the middle. A cautious approach would be to adopt something closer to the lower end initially. Adopting one of the extreme values does not seem reasonable.

David, you have no idea if your house is going to burn down. Yet you buy fire insurance anyway. By the same logic, what insurance should be bought for global warming? None?

You don't know what health risks you might face in the future, or their costs. How much health coverage should you buy? Enough to cover $50,000 worth of procedures, or $1M? What happens if your expenses go above $1M -- who pays then? Other people. What people will pay if global warming goes above X degrees?

We already know GW is 1 C, and we almost certainly can't avoid 2 C. What are the consequences? Don't pretend they don't exist. We're already bailing out people because of sea level rise. Towns are being moved. So you can't say there are no consequences.

Do you think it's moral for us to cause problems and expect the future to pay for us?

And we do know how to stop global warming -- stop emitting carbon.

Your answers mean we would never act on global warming, using the excuse of uncertainty. By your logic, you wouldn't buy fire insurance unless someone told you for sure what day your house would burn and how bad it would be.

David -- Acting on global warming is not a binary decision. We are already acting on global warming to some degree. The question is how much more action to take and how much to sacrifice in that endeavor. As you say, we could end global warming by not using any more coal, oil, or wood fuels. Without these sources of energy, billions of people would die and civilization would be destroyed. That's obviously too big a sacrifice.

One aspect of the morality is who makes the sacrifice. California just passed a ballot proposition for higher gasoline taxes. That's hardly any sacrifice for me, because I can easily afford the additional cost. It's a big sacrifice for millions of poor Californians.

Similarly, French elites have imposed policies to reduce CO2 emissions. These policies are comfortably affordable by the elites, but they do major damage to the quality of life of ordinary families.

What's the morality of delaying coal-based electricity to Africa? The quality of life is many of these countries is so miserable hard for Americans to visualize. Is is OK that tens of millions of Africans have short, miserable, unhealthy lives in order to produce somewhat better lives for people 50 or 100 years from now? If the African people could vote on this issue, wouldn't they choose better lives for themselves today?

David, the biggest uncertainty in climate change is how much CO2, CH4, N2O, brown carbon, etc the future is going to emit. You can pin down climate sensitivity to 3 significant figures but the outcome will still be very uncertain because no one knows the future.

David in Cal wrote:
"What's the morality of delaying coal-based electricity to Africa?"

This is an answer that I just can't tolerate.

David, you're well-to-do. Why can't YOU afford to reduce your carbon emissions, just because some Africans can't?

I do reduce my carbon footprint. I have solar heating on the roof and drive a hybrid. But, I understand the magnitudes well enough to know that my actions multiplied by many other people are still insignificant and will not be sufficient to cause a reduction in CO2 in the atmosphere. We need a new source of cheap energy.

David, it's laudable that you try to reduce your carbon footprint. I do too. But you, me and all Americans still emit too much carbon -- we have about the largest carbon footprints in the world. The US is one of the wealthiest country in the history of the world. If we can't afford to only use clean energy now, when we that be feasible?

US personal income per capita is now $52 K. At what value X can we afford a clean energy society, where X = personal_per_capita_income/$50K?

David - you're probably right in principle that the US is wealthy enough to cut way back on our CO2 emissions. But, the political will isn't there. I am not sure the resources exist. And, people have other uses for the money.

1. The first step would be to build hundreds of new nuclear reactors. But, there would be huge opposition. And, I do not know if there's enough uranium.

2. Putting solar on every roof would help, but I don't know if the resources exist to construct hundreds of millions or billions of solar panels.

3. The country would not support moving a huge amount of money away from other uses. E.g., Congress won't cut Social Security in half and move that money into CO2 reduction. They won't end welfare or aid to education or defense or Medicare, etc. For better or for worse, money is going to go to the areas with the most clout.

If, despite all these problems, the US somehow did cut our CO2 emissions to a small amount, worldwide CO2 emissions might well keep rising, depending on what the rest of the world did.

David in Cal said...
"3. The country would not support moving a huge amount of money away from other uses. E.g., Congress won't cut Social Security in half and move that money into CO2 reduction. They won't end welfare or aid to education or defense or Medicare, etc."

The Republicans just gave $1 B to the richest Americans.

We certainly have the money, and would not need to touch SS or Medicare or defense. (Although our military spending is obscenely and immorally high.)

"If, despite all these problems, the US somehow did cut our CO2 emissions to a small amount, worldwide CO2 emissions might well keep rising, depending on what the rest of the world did"

Obviously it depends on the rest of the world -- but the US is still a large contributor, at about 1/8th of global emissions (and even larger per capita). But if the US was serious about getting to a noncarbon economy, that would inherently put lots of pressure on the likes of Australia, UK, Russia and other high-emitting countries to do the same. The US is in a position to exert pressure on them to do the same. A carbon tax on their imports would help that along nicely.

Coincidentally I just came across an article supporting a point I made yesterday.

We Might Not Have Enough Materials for All the Solar Panels and Wind Turbines We Need
We'll need to be mining a dozen times as many metals to meet demand for wind turbines and solar panels by 2050.

Time to get (more) serious about nuclear.

David, thanks for the PopMech link.

A few days ago I wrote, above:
"The Republicans just gave $1 B to the richest Americans."

Of course, I meant a trillion! Sorry.