If you are around at the AGU this afternoon, come see my poster on evaluating the forecasts of old climate models: GC43J-1665. I'll be there between 2pm and 5pm. pic.twitter.com/CZelCp3vzb
— Zeke Hausfather (@hausfath) December 13, 2018

Click on the image to get a fuller
presentation of the Hansen graphs.

I assume he put the actual forcings that occurred into Hansen's projections, instead of what Hansen assumed.

I don't know what models Zeke's considering here, but there were only a few big models that cover that time period -- see the IPCC ARs of the period.

It will be interesting to see how much the observations of the 2010s bring the agreement back in line from the 'noughts. You can get a sense of that from Ed Hawkins' monthly update comparing observations to CMIP5 models; they've come back up after the lows around 2010: 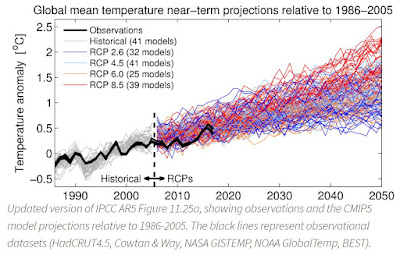 Added about one hour later:

I asked ZekeH on Twitter how he corrected model projections for the actual emissions, instead of the assumed emissions. He wrote:

We didn’t actually rerun old models with modern forcings. Rather, we evaluated models on the basis of the ratio of model warming to model forcings, which mostly normalized for misspecified future forcings (see the bottom panel of the figure).
— Zeke Hausfather (@hausfath) December 14, 2018

we evaluated models on the basis of the ratio of model warming to model forcings, which mostly normalized for misspecified future forcings (see the bottom panel of the figure).

So the top graph is showing divergence between projected vs observed temps but the bottom graph shows close agreement wrt forcing vs warming?

This pretty cool and is also from Zeke: https://www.carbonbrief.org/mapped-how-every-part-of-the-world-has-warmed-and-could-continue-to-warm