I found this photo a while ago, and it's been sitting on my hard drive awaiting something.

I find the face of the pig on the right to be very intelligent (I guess) and definitely haunting. He seems knowing, and miserable, fully aware of his plight. 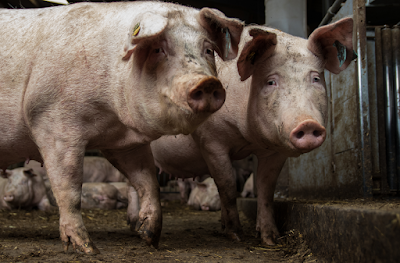 I eat meat. I've tried being a vegetarian, but after I few months I feel somewhat anemic, or at least low on energy. I think. It could well be psychosomatic, for all I know -- I wouldn't be surprised. The longest I've gone is four months. But in the last year or two I'm trying, imperfectly, not to eat pork, because they seem too intelligent, too aware. I hardly eat beef, too, because of the red meat thing. So mostly I eat chicken. Some fish and shrimp.

When I was a kid, maybe 10-11 years old, one evening my dad took me to a neighbors a few miles up the road. (Where I grew up, houses were far apart and you'd know you neighbors a mile or two in every direction.) The evening's task was to butcher a pig. They took one out back and shot it -- they didn't let me watch that. But after some draining they brought the carcass in and started cutting it up. My job was to take certain pieces and run them through a grinder to produce ground pork. I did it without complaining, or thinking twice about it, really. I was included. People just did this, as far as I knew. We ate a lot of butchered animals then. Every so often my grandfather would drive a couple of his steers down across the border into Maryland, tied in the back of his pickup, taking me and a cousin or two, and back his truck into a plant where they'd kill the cows and butcher them. After two hours or three, we'd back up again to the plant and they'd load big buckets of meat into the back of my pap's pickup. Then we'd drive the hour or so home, and spend the night wrapping up meat. My job was usually to label the packages taped in white paper with a black magic marker, because I could make the best block lettering. They'd go in the freezer. My grandparents took half the cow, and my parents would buy the other half. This was our meat for the winter. (We never ever went to a restaurant to eat. The first time ever I think was a Pizza Hut the day of my high school commencement.) It was almost always beef. I don't remember much pork, except that one time I was the grinder, and the chickens on my grandparent's gentleman's farm were just for eggs. Occasionally there was venison (never from my gun; I only went deer hunting once, and it was a disastrous experience that maybe I'll tell another time), and even once some black bear my grandparents got from someone, which tasted sweet and better than you might think.