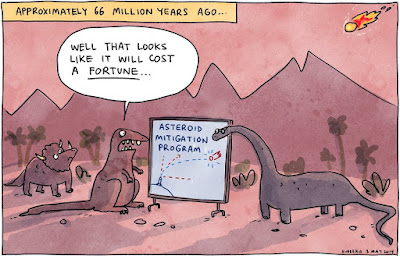 This cartoon illustrates the limitations of the Precautionary Principle. One version states:

Environment management rule that if a threat of serious or irreversible damage to the environment or human health exists, a lack of full scientific knowledge about the situation should not be allowed to delay containment or remedial steps if the balance of potential costs and benefits justifies enacting them.

One must consider not only the magnitude of costs and benefits but also the likelihood. Otherwise there's an insoluble problem of resource allocation. If one ignores likelihood, the Precautionary Principle would tell us to spend the entire federal budget fighting global warming. And, spend the entire federal budget on Asteroid Mitigation. And, spend it all to prepare for a repeat of the 1811 New Madrid earthquake. Etc.

Regarding likelihood, global warming is all but certain.

Is there anyone who would bet that the next decade won't be hotter than the current one?

Layzej, try Galina Mashnich and Vladimir Bashkirtsev. Getting them to pay if they lose is another matter:
https://www.eenews.net/stories/1060103497

Layzej - I agree that global warming is all but certain. However, aspects that are not certain include
1. How fast the planet will warm
2. How much harm and how much benefit will accrue due to the warming, and when will it happen
3. Will the warming ever be catastrophic? Or, is there some natural limit on the amount of warming?
4. Effectiveness of current anti-warming efforts

In fact, #4 is closer to certain in the wrong direction. The current approach to fighting global warming is very likely to be insufficient to reverse the growth of atmospheric CO2.

One through three are quantified within bounds of uncertainty.

What are you considering to be the "current anti-warming effort"? Most economists agree that a carbon tax would allow the market to drive us towards an efficient solution.

Fiscal conservatives should prefer this to the command and control legislation of the Green New Deal.

Laysej - I see the current efforts as lots of research, muck of it dreadful; big, fancy international meetings; toothless international agreements like Kyoto and Paris; moderate worldwide efforts to economize; development of minuscule amounts of wind and solar power; and lots of talk and political demonization.

If you're a hammer, everything looks like a nail. Naturally economists like a economic solution and politicians like a political solution,. However, global warming is really a scientific and engineering problem. No political or economic policy can work if the world doesn't have the energy it needs. Global warming will be solved if or when some new source of energy is developed that can replace oil and gas at a comparable cost. Or, the world will try geo-engineering, which is of course terribly risky.

It let's the consumer and corporations decide how and whether they want to address the cost of the carbon they are emitting.

A grocery store may decide to invest in doors for their fridges rather than installing solar panels. Or they may decide to do nothing at all.

The current model in the USA is to ban incandescent light bulbs, enact fuel efficiency requirements, throw money at green tech companies (picking winners and losers), etc. That top down approach impinges on individual freedom and is inefficient relative to a free market approach.

Layzej - I agree with your criticism of the current USA approach.

One trouble with the carbon tax is that AFAIK nobody has said how high the tax has to be. Is there a level that will not throw the economy into recession or impoverish a lot of poor and rural people, but which is still high enough to encourage consumers and corporations to solve the problem rising CO2 in the atmosphere? And, BTW this carbon tax could make US products less competitive with foreign competition. So, that also must be taken into account.

And, BTW this carbon tax could make US products less competitive with foreign competition. So, that also must be taken into account.

It would also encourage innovation and put the USA at the vanguard of the new energy economy.

One other thought. If the left is the one to introduce a revenue neutral carbon tax then they may distribute the dividends evenly among the population. Everyone gets $100. That's not horrible - It's similar to what Bush Jr did in 2001, but it's something like socialism if everyone is treated equally.

But if the right introduce the tax they can use the dividends to reduce sales or income tax.

By opting out of the conversation the Republicans are ceding power to the left. It's worse yet because the Democratic solution is not a carbon tax at all but a spending spree.

David in Cal wrote:
One trouble with the carbon tax is that AFAIK nobody has said how high the tax has to be.

It has to be high enough to curtain CO2 emissions. There is no one theoretical number. Ideally the carbon tax would be adjusted every year to accommodate changing conditions and its effectiveness. But few politicians have the courage to do that and to be so open about taxes.

Is there a level that will not throw the economy into recession or impoverish a lot of poor and rural people,

BC has a carbon tax. It's working, and their economy is doing better than most provinces in Canada.