Just posting a nice graph via Robert Rhode of BEST. It's often forgotten than land globally is warming about twice as fast as the ocean surface, because land has a smaller heat capacity. (To put it another way, heat more easily penetrates through the sea surface than through the land surface, and ice.) So we're now seeing a global land average of about 1.7 - 2.0°C relative to the 1850-1900 average. That's 3.0 - 3.6°F. More as you go northward, less in the tropics. Oregon has seen a temperature rise of 2.7°F since 1895. Alaska, which just had its warmest July ever, has warmed by 4.5°F since 1960. (I'm using Fahrenheit because it's more familiar to Americans, including me.) The continental US, which had only its 27th warmest July (of 125 years) has warmed by 1.8°F since 1895.

And so it goes. 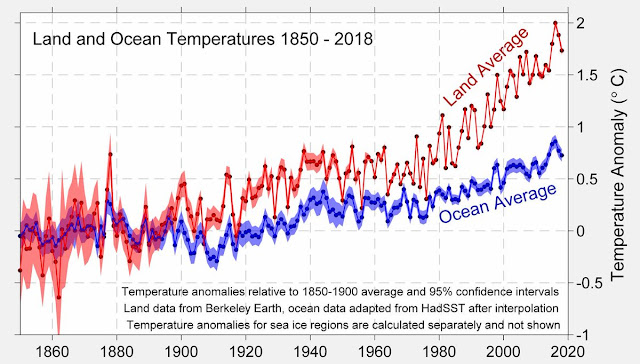 Also that over the oceans more of the additional available energy goes into evaporation rather than heating of the air. That effect will remain in equilibrium, while the heat capacity mentioned above is in the transient phase. At the moment both effects are about the same size.
https://twitter.com/SISeneviratne/status/1159433357803118593