We all learned that floating ice, when it melts, does not raise the level of water in, say, a glass, because the the density of the water from the melted ice is equal to the density of the water it's floating in.
But it's a different situation for floating sea ice and sea shelves, because, although they arise from frozen sea water, almost all the salt has been rejected during the freezing process. I heard this long ago and forgot about it, but it is noted in a corrigendum to the paper in The Cryosphere which I discussed here. (A corrigendum is a change to an article, not necessarily, as many people often assume, a correction.) It says 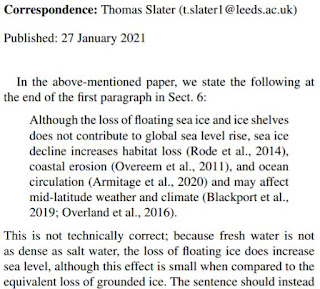 The amount of ocean rise from melted sea ice is 2.6% of the original amount of displaced sea water.
Here's a brief popular explanation. Here's a PDF of the 2004 paper by Peter Noerdlinger and Kay Brower (for which the journal is asking $52!)(that's not 52 factorial, but it might as well be). Noerdlinger seems to be the one that brought this to everyone's attention a few years earlier, from what I gather. Here's the necessary excerpts from their paper: 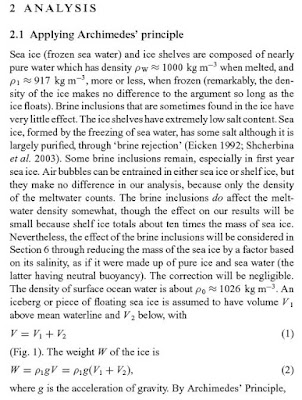 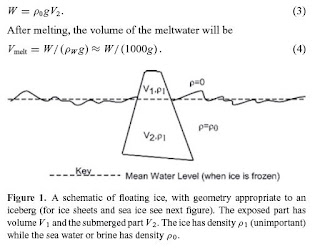 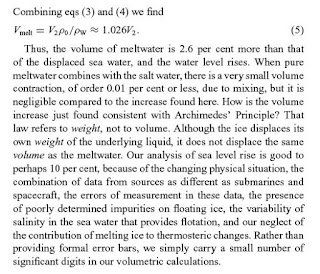 There's another very small effect too, which I wrote about in 2014 for Yale Climate Connections, but had also forgotten until I did a Google search on the above. When the floating ice (or ice shelf) melts, that area of the ocean surface, which once strongly reflected sunlight (since ice is white) is now opened up to the sunlight's heat, warming the ocean water, causing it to thermally expand. This is a tiny effect, of course, and not possible to calculate generally since it depends on location. But you can tuck this in your back pocket for when you have your next argument on this topic and want to be a smart aleck.
Posted by David Appell at 2/06/2021 01:05:00 AM

Here is an old usenet discussion from 1997 that explains the phenomenon, so it was clearly known before 2004:
https://groups.google.com/g/sci.environment/c/KGRrS2R_jjY/m/nHGmBQySPK4J
Lots of chatter, but as far as I can see James S. Lovejoy is the first to give a good explanation on december 8, starting "Say we have an iceberg that displaces 1 million cubic feet of sea-water".

Thanks Thomas, that's good to know.