The Thing Is, the Hockey Stick Isn't a Surprising Result

The other day I wrote that I doubted Steyn considered the work by other research groups that have found hockey sticks in the paleoclimate data, many using independent mathematical methods.

I still think that. Because, here's the thing: the hockey stick isn't a surprising result.

In fact, physics says it'd be far more surprising if the hockey stick wasn't true. And this is true regardless of any particularities of the proxy data -- it depends only on the track followed by atmospheric carbon dioxide, and the basic physics of global warming.

On his blog, Steyn wrote: 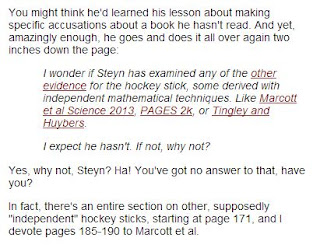 I don't doubt that Steyn looked at some of the other hockey stick papers, waved his hands and wrote some words about them -- the usual junk about Yamal proxies and upside down proxy arrays and the like. In other words, a lot of gossip and hearsay that can be found on many denier blogs over the years.

Steyn hasn't made a scientific argument about the hockey stick yet. Gossip, hearsay and (especially) blog posts aren't science. Science is what you find in the peer reviewed literature -- careful detailed work that is reviewed by experts. We're supposed to think that a blogger known mostly for his Islamophobia somehow disproved and dismissed all the independent mathematical work by Ammann and Wahl, Tingley and Huybers (and again in 2013), Marcott et al, and PAGES 2k -- the latter a huge, comprehensive paper written by over six dozen scientists?

That Steyn saw some simple thing that all these experts missed and was able to dismiss all the work and expertise in a few pages of a self-published book? And overthrew basic physics? Not. Bloody. Likely.

As I wrote, the hockey stick result is obvious, since it's based on some simple observations and simple physics:

1) The emissions of manmade CO2 increased faster than exponential after the start of the Industrial Revolution -- it was a "superexponential" increase: 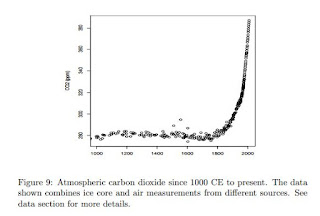 This isn't surprising -- human population itself has been on a superexponential increase since 1000 A.D., so energy use has been as well. So have the other prominent greenhouse gases: methane and nitrous oxide concentrations in the atmosphere.

Of course, you still have to collect the proxy data and calibrate it and work through all the complicated mathematics to find what the actual temperature variation over the last X millennia is.

Human population, and atmospheric CO2, have decelerated to just exponential growth only in recent decades. As Hüsler and Sornette concluded:

So the hockey stick isn't a surprising result. And you won't find that in a book that's really just intended as nothing more than a big F-You.
Posted by David Appell at 8/21/2015 11:13:00 AM

There are 370 data sets here, conveniently collected by NASA, all from peer-reviewed and published papers, reconstructing temperatures and precipitation from the past.

AFAIK, the vast majority give rise to the now-classic hockey stick shape for reconstructions that come up to the present.

Toby: Great link! (But don't expect any of the Steyniacs to care.)

A look at a number of indicators of man's influence over time shows mostly hockey sticks, as our population growth looks like one.

Talking about the science behind climate change is bad for the economy. Doesn't sell books or drive traffic.

I recommend we talk about Steyn's homophobic attack on Mann and Laden, and Curry's endorsement of it: