There's really no other conclusion to make than the headline to this post. 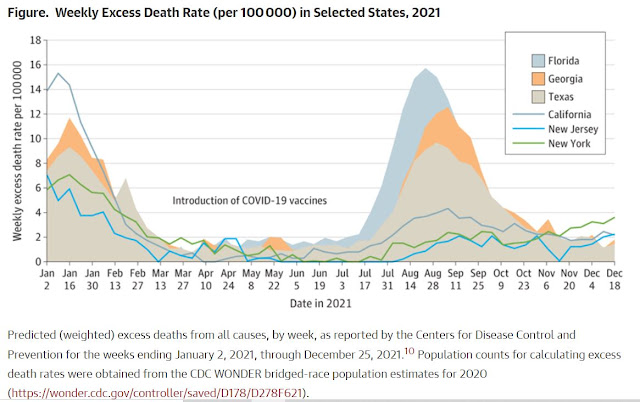 The governors of red states, by their lax policy choices during the COVID-19 pandemic, have effectively left their citizens to early and needless deaths.
This figure comes from JAMA (Journal of the American Medical Association), in the article "The Growing Influence of State Governments on Population Health in the United States" by Steven H. Woolf, MD, MPH. Where you live makes a difference to your life expectancy, both comparing the US to other countries and within the US as well--and not just with respect to the pandemic. Woolf writes:

For decades, the population of the US has experienced shorter life expectancy and higher disease rates than populations in other high-income countries. The gap in life expectancy between the US and 16 peer countries increased from 1.9 years in 2010 to 3.1 years in 2018 and 4.7 years in 2020.1 The US health disadvantage is even worse in certain states, with states such as Alabama and Mississippi having the same life expectancy as Latvia (75 years).

Disparities in health across the 50 states are growing, a trend that began in the 1990s. For example, in 1990, life expectancy in New York was lower than in Oklahoma, but the trajectories separated sharply in the 1990s and, by 2016, New York ranked third in life expectancy, whereas Oklahoma ranked 45th. By 2019, mortality rates at ages 25 to 64 years differed by a factor of 216% between the states with the highest mortality rate (565.1 per 100 000) and the lowest rate (261.9 per 100 000), up from 188% in 1999. The widening gap cannot be explained by changes in the racial and ethnic composition of states, because the same trend occurred within racial and ethnic groups.

Someone should download these data and integrate under the curves to find the total difference in deaths. (I've already heard some of DeSantis's excuses: vaccine tourism, older population.) Woolf continues:

For example, excess death rates in Florida and Georgia (more than 200 deaths per 100 000) were much higher than in states with largely vaccinated populations such as New York (112 per 100 000), New Jersey (73 deaths per 100 000), and Massachusetts (50 per 100 000). States that resisted public health protections experienced higher numbers of excess deaths during the Delta variant surge in the fall of 2021 (Figure). Between August and December 2021, Florida experienced more than triple the number of excess deaths (29 252) as New York (8786), despite both states having similar population counts (21.7 million and 19.3 million, respectively).

And it's only going to get worse:

State control over health outcomes shows no signs of waning. Legislatures have passed and are considering numerous laws designed to transform elections, civil rights, school curricula, and climate policy. New laws and court decisions could affect health and health care and exacerbate inequities. The Texas abortion bill and other challenges to Roe v Wade, new state laws to nullify gun regulations, and other sweeping measures suggest that states will be wielding greater control over the health and safety of their populations. Increasingly, an individual’s life expectancy in the US will depend on the state in which they live....

States are laboratories for experimentation, but fragmented health policy has consequences. While other countries mounted a national response to COVID-19, the US was hobbled by 50 response plans and, to date, has lost more than 1 million lives. Although state governments have the right to set their own path and policies, the public should decide whether life expectancy should be part of the experiment.

I'm afraid that the American public is, at least via their votes for primarily Republican legislatures and governors, deciding that, astonishingly, there are some things more important than their health and their lives.
Posted by David Appell at 3/15/2022 09:28:00 AM

Regarding low vaccination in Florida, the Governor should have been providing leadership rather than pandering to a vaccine hesitant base.

"there are some things more important than their health and their lives."

That is certainly true. There is always an individual balance struck between safety and freedom. Some folks won't go near vehicles or streets due to the risk. Everyone draws a different line.

But how can "freedom," whatever exactly that means to a person, be more important than life itself, especially in this case where we're talking about relatively innocent protections like masks and vaccinations?

I may decide that I am at the end of my life, and I'd rather spend my last days strolling the grounds of my old age facility rather than locked down in my room, even if the risk is quite high.

I may decide that, being vaccinated, I'm happy to have friends over for dinner rather than remain isolated. I may even decide that as a healthy vaccinated individual I don't care to wear a mask outdoors.

There is some risk involved in each of these scenarios. How much risk is tolerable may vary from person to person.

Keep in mind that remedies went well beyond simply masking and vaccinating. There are currently ~30,000,000 people in lockdown in China. I would not choose to live in a state with a zero Covid policy, though excess mortality would possibly be lower there.

Layzej, there is a difference between China's draconian measures and just encouraging people to vaccinate, making sure it's easy to get too and try to get rid of all the conspiracy theorists. Exactly whet strategy works best differs from place to place. For example, some have suggested that in Eastern Europe charging for vaccines would have worked better. If people distrust the government and worry that it's trying to push something dangerous on them, making it cost turns it into something exclusive.

"States are laboratories for experimentation, but fragmented health policy has consequences. While other countries mounted a national response to COVID-19, the US was hobbled by 50 response plans"

Most American states are as large as countries, so that's no excuse.

There is also the issue of age. Covid is extremely risky for old people while younger folks have a much much smaller risk. I haven’t done the numbers but I guess that covid at 25 is less risky then the all-age flu risk. If you’re 25 and you feel invulnerable, I can see why the vax and masking may not be on your list. Vaxing because of side effects (yes, these are greatly exaggerated by the right wing but I know a couple of people who had problems). Masking because it is a (small) pain in the neck. And for years.

If you’re 25, you may end up doing this for other people, or because of laws.

"there is a difference between China's draconian measures and just encouraging people to vaccinate, making sure it's easy to get too and try to get rid of all the conspiracy theorists."

I agree 100%. A responsible government would have done the following:
1) Provide tools and technologies to allow people to mitigate risks.
2) Provide accurate and honest data around the relative risks of catching the disease vs. the mitigations.
3) Provide leadership to encourage people towards civic responsibility and combat misinformation on either side.

Possibly lockdowns were also warranted towards the beginning.

I know there are many people who were envious of the freedoms afforded to Floridians, even while shuddering at the pandering and lack of leadership from their government.

How have governments not done numbers 1-3?

Granted, number 2 is difficult in an envolving scientific environment. But I think the US government, at least, has done its best, and mostly with #1 and #3, with exceptions -- govt should have been sending masks to everyone through the mail, and tests much earlier). But they're swimming upstream against constant conspiracy theories and purposeful mis- and disinformation.

I don't get how anyone can be envious of Florida. Look at their higher death rate. There will also be a higher case rate. That's going to mean more cases of long COVID, more side effects of having had COVID, etc, in a state that hasn't expanded Obamacare (viz expanded Medicaid eligibility under the Affordable Care Act).

All so, IMO, DeSantis can pander to the Trump crowd from the right and get the Republican nomination for President in 2024. I think it's beyond shameful. I'm very thankful I don't live in Florida.

+1 Pete. We vaccinated our kids as soon as it was available but it was not after carefully considering the data. We had to rely solely on the advice of Health Canada: "Health Canada completed a thorough and independent scientific review of the evidence. They concluded that the benefits of vaccination outweigh the risks in children 5 to 11 years of age."

How have governments not done numbers 1-3?

All governments have done all three to varying degrees. Arguably DeSantis did horribly at #2 and #3. It's when governments go beyond those three where they really need to show their measures are warranted, and on balance, beneficial. DeSantis did well in not going beyond these three.

"I don't get how anyone can be envious of Florida. Look at their higher death rate."

Folks in Florida were free to remain in lockdown with their neighbors to the north. In that case they would have been at very little risk. They were also free to go to restaurants or take up employment. They would have assumed that risk.

DeSantis may still take blame to the extent that Floridians may have had a skewed perception of the risk. That's where #1-#3 are critical.

Even California made decisions in favour of freedom rather than safety. They also had a positive excess mortality. Perhaps perpetual lockdown could have avoided that.

Individuals are free to remain in lockdown, to a point. They still have to go out into society for groceries or trips to doctors or any number of things, and if they want to be safe they rely on others taking precautionary steps during the pandemic. You can't fight a pandemic if everyone does whatever they want -- it will be chaos and death. The statistics show it.

Yes you have to make tradeoffs between perpetual lockdown and complete freedom, for the sake of economic functioning. But people like DeSantis have told lies and declined to take simple, sensible steps. He wouldn't even admit if he was boosted, when he had a wife at home with cancer and small children. What kind of a-hole does that? WHY would he do that? WHY??? He's playing political games with people's lives. That's why people call him DeathSantis.

I agree completely. His pandering comes at the cost of lives. It's unconscionable.