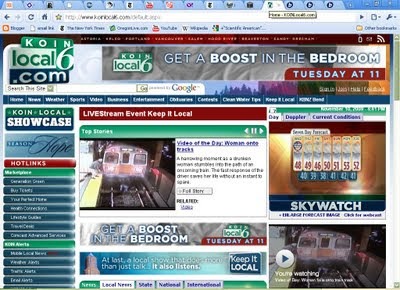 I haven't watched local news in...about as long as I can remember. Here's why.
I checked the Web site of a local TV station in Portland today (KOIN), wondering about a shooting near Portland that killed two and left several wounded. What did I find?
A story about someone who fell in front of a subway train.
In Boston.
That's right. Despite a shooting rampage here in Oregon, this news station decided that the lead story was about a subway incident in Boston.
Why? Because they had good pictures about it. No other reason at all. Why would anyone in Portland care about a women who fell in front of a train in Boston? Sure, it's a sad story -- there are thousands of them around the world, ever day.
This was pure voyeurism. It's disgusting.
I mean, today's shooting incident in Oregon was just the Shooting-of-the-Day, right? They happen nearly every day in American now -- 2 killed, 7 wounded; 13 killed, 25 wounded; 4 dead, 8 injured. No one even gives a fuck anymore. Now they aren't ever worth exploiting by the media -- they're rather people fall in front of trains.
This country is becoming more intolerable all the time. Doesn't it anger you?
Posted by David Appell at 11/10/2009 04:46:00 PM

It's not exactly voyerism.

The product of news organizations is not news. It's you. They sell your eyes to advertisers.

Unfortunately, there is no market for hard news (think city council meetings). People will tune in for one-off events, but won't tune in day in and day out and so can't support the business model.

The exception is soap opera women (40% of women, 20% of the population), who will tune in news or no news so long as their interest is held by what airs.

Their interests are easy to satisfy, and can be satisfied every day. For example the subway fall.

So that's the media business model.

They don't care what you want, because you're not a regular enough contributor of revenue.

Nothing will air that will momentarily lose the interest of soap opera women. That pretty much explains everything.