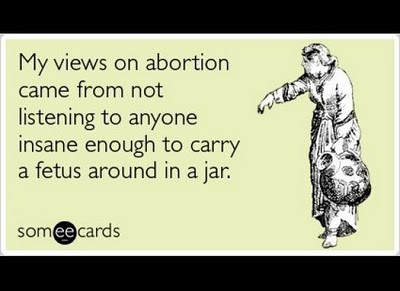 "Hence, life clearly begins at conception. Any definition other than that is a purely political contrivance intended SOLELY to serve a POLITICAL END!"

There is no objective scientific, political or religious answer to that question. Beliefs on the matter differ from person to person and belief system to belief system.

There's enough people on both sides that there's an argument over it (at least in the US). But there's also enough people on both sides that representative government won't allow one side to force the other. Thus it becomes a matter of choice. If you don't want to abort at 5 weeks, you can choose not to. If you do want to, you can. If you want to argue about it, you can. But nothing will change until a sizable proportion of the population agree it should change.

"life begins at conception" is not the earliest point that can be taken on the matter.

It's possible to believe "Life begins *before* conception". That is just as valid a belief system, given that they are all subjective anyway.

Such a belief system would consider women to have a moral obligation to give birth to as many children as possible.

Deliberately choosing not to conceive every 9 months would be denying a potential child his birth, and as such would be considered murder by these believers.

But they wouldn't be allowed to force their beliefs onto others. See how it works?

That's because it IS utterly ambiguous. That's the real world we live in. It's why there is widespread disagreement on the matter. There is no universally accepted view on what constitutes a person.

Thanks to biology being a gradual affair (blame god) there's no clear point of separation that everyone can agree on. If your zygote was conscious and could feel it would be a much easier case.

But no, things develop incrementally so that it produces a rich source of disagreement, especially when religion becomes involved - which is basically just one opinion being held as dogma.

It's not impossible at all. It's being done. There is a limit to abortion in law before it becomes murder in all societies in the world. You just disagree with those limits. Arguing that those limits aren't your limits therefore your limit is right is circular reasoning.

The actual timing largely differs from country to country. Because it's not some self-evident truth, it's entirely subjective.

Everyone can agree that killing a baby is wrong, but as you push further and further back towards conception there is less and less agreement. The law is set to allow the majority to make their own choice. Far better that than to have a minority forcing their view upon everyone else.

But there is something subjective about deciding that constitutes the difference between a person and non-person. There's no scientific basis for such an opinion. In fact science cannot weigh into the matter of what constitutes a person. It can provide us stuff like "at this date an embryo develops X, at this date it develops Y", but that is only information that we can intrepret and that interpretation comes down to being subjective again.

"your hypothesis that "Life begins *before* conception" and the “logical” extensions surrounding it are far too absurd to dignify with any sort of rebuttal."

It's not my hypothesis, it's a hypothesis I present to demonstrate that your view is by no mean the earliest point at which a person could be considered needing protection. It could be considered that a woman who chooses to have only one child has murdered the ones she chose not to birth.

That hypothesis is no less correct than yours, both being *entirely subjective*.

I couldn't care less about Roe vs Wade. The fact is that many people don't believe a person starts at conception, and those people are of a significant number that it would be tyranny of the majority (or minority) to force them to follow their beliefs.

SBVOR you clearly can't defend your faith otherwise you would be able to address my arguments.

The pet crazy is an attention whore. Any kind of attention. Ignore the whore and he'll go away.