A paper (sub. req.) in this week's Science gives some estimates of the damage from last year's heat wave in Russia:


Preliminary estimates for Russia referred a death toll of 55,000, an annual crop failure of ~25%, more than 1 million ha of burned areas, and ~US$15 billion (~1% gross domestic product) of total economic loss (15).

Here's a distribution plot from the paper, with the five hottest (red) and coolest (blue) years marked: 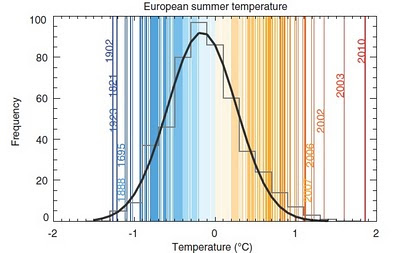 and here's the frequency per-decade:

(here the dotted line is the 95th percentile of the distribution of maximum decadal values that would be expected by random chance.)

Nothing suspicious about this, is there? (Though I'm sure we'll learn by next week that this is suspect because one of the authors stole a pack of gum when he was 8-years old and another sometimes fails to wipe his shoes when he comes into the house.)