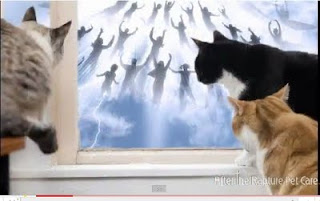 Now that the Rapture has not occurred, as predicted (though leaving cats behind is extremely unfair--they ought to be the first to go), can we expect Harold Camping to admit that he was wrong? That the Bible is not an absolute font of truth? Will his followers admit that he's a false messiah, just another in a long line of charlatans, cranks, and clowns who have previously predicted the End of the World? That their beliefs might not be serving them well and a bit more rationality and critical thinking might be in order, and that such a philosophy might help rid the world of prejudice, falsehoods, and turmoil?