Fred Singer spoke at Portland State University yesterday, the token "skeptic" in a series of five lectures that included speakers like Phil Mote and Aslam Kahlil.

Singer is 87 years old, and I genuinely hope I'm as healthy and cognizant as he is when I'm that age.

Unfortunately, this is the nicest thing I can say about the talk, and I've been trying. Almost everything he said was either wrong, deceptive, or both.

As one member of the audience noted, Singer has a very folksy, relaxed style. He made repeated claims to simply be following the methods of science, but there was little evidence of this.

But what Singer said was deceptive and almost all of it entirely wrong. That's obvious if you know a little climate science, but I fear that some in the audience took him seriously.

About the only things he said that made any sense were (1) "CO2 is a greenhouse gas," (2) "models are chaotic," and (3) Like all results in in science, the CO2 correlation cannot be proved, it can only be falsified.

I'll first discuss the second of the highlights, because it's the most egregious, and then the first. The rest often contradict themselves (Singer claims there is no warming, and then gives possible explanations for...the warming.

Most of Singer's arguments seemed to come from his work with Douglass, Pearson and around 2004-5, and have been dissected in this RealClimate post and associated links.

Most egregious of his claims was that there has been no warming since 1975. As proof he put up a graph of UAH (University of Alabama at Huntsville) satellite data, compiled by the Christy/Spencer group. Singer said he calculated that it had zero linear trend.

One audience member down front almost jumped out of his seat while pointing out that Singer was using version 5.0 of the UAH data, which is years old and had not been properly (and famously) corrected for satellite drift. UAH did that and their new data, version 5.4, now shows warming, and they list the trend at the bottom of their data page: +0.14°C/decade for the globe, +0.17°C/decade for land. Astonishingly Singer feigned ignorance of this.

The other major falsehood was that old saw of the tropical tropospheric hot spot. Singer put up this graphic from the 2006 CCSP Report Temperature Trends in the Lower Atmosphere: 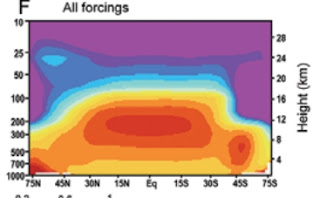 He then put up this figure from a later chapter in the same report:


Or, as he summarized it in his next figure: 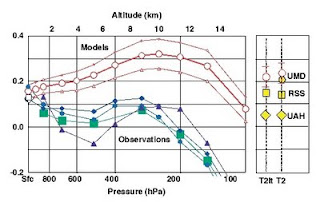 which I have taken from RealClimate. As RC points out, the first thing you should notice about this plot of the data is that it has no error bars. That, of course, is scientifically verboten. As RC shows in excruciating detail, when you do properly adjust the radiosonde data and when one considers the errors there is no disagreement between models and observations. RC concludes:


...there is no clear model-data discrepancy in tropical tropospheric trends once you take the systematic uncertainties in data and models seriously. Funnily enough, this is exactly the conclusion reached by a much better paper by Peter Thorne and colleagues. Douglass et al’s claim to the contrary is simply unsupportable.

(Of course, this has never stopped David Evans from proclaiming there still is a discrepancy, in every venue that will have him, except the only one that really counts: a scientific journal.)

[As well, the tropical tropospheric hot spot is not a signature of GHG warming, it's a fingerprint of any warming, regardless of the source, as Tim Lambert has been pointing out for years.]

There were so many basic errors in Singer's talk that it's hard to believe this is the best skeptics science deniers can do. Worse of all was his continuing insistence that he was simply following the science, with the implication that others weren't. It would be sad if Singer hadn't been so dangerous all these years.

Slide 20 of Fred Singer's presentation was labeled as version 5.4 of the UAH Global Temperature Anomaly, not 5.0 as you state. Rather than 'years old' the slide shows the last date as March, 2011. I was at the presentation and I have the slide deck.

Yes, there was a buffoonish ponytailed and baggy-shorts wearing person in the audience who jumped up and down upon seeing the slide and yelling out (disrespectfully) that these were older slides, version 5.0. I was dumbfounded as the slides were clearly labeled.

Would you please send me a copy of that slide? david.appell@gmail.com

David, I sent you the slide. Was I incorrect in stating that it is version 5.4?

No, but as the commenter in the first Singer video I linked to today pointed out, the slide says v5.4 but the analysis apparently relies on v5.0, that is, it does not include the necessary adjustments. So who knows what data Singer was really using -- it certainly wasn't the real v5.4 data. In any case Singer was dead wrong in his claim that there is no trend in the data.

PS: The pony-tailed guy down front was hardly "buffoonish." Actually he seemed one of the most informed people there on this topic, and certainly more so than Singer.

Can you please point out any discrepancy between these graphs and Dr. Singer's?

I'm less interested in remarks from a 'commentator' in a video, which you provide as an authoritative source. I have shown you a link to Dr. Spencer, who is responsible for issuing the UAH data and requesting where you see discrepancies between Drs. Singer and Spencer.

Dr. Singer is 86 years old and had been up since 2am trying to catch flights to Portland (after cancellations the night before). He clearly wasn't at his best.

However, the slovenly and constantly interrupting Mr. Ponytail was nursing on his mother's teat when Dr. Singer was establishing the National Weather Bureau's Satellite Service Center. Singer has worked as a consultant for several government agencies, including the House Select Committee on Space, NASA, the Government Accountability Office, the National Science Foundation, the United States Atomic Energy Commission, National Research Council, the Department of Defense Strategic Defense Initiative, Department of Energy Nuclear Waste Panel, and the Department of the Treasury. (Meanwhile, Mr. Ponytail sits in a small room at PSU where he delights in convincing other locals of his brilliance.) In earlier times appropriate respect would be accorded Dr. Singer, but this is apparently what climate alarmists have sunk to in defense of the gravy train.

If the graphs from Drs. Spencer and Singer do indeed match up, then you should fess up that there are only 2 conditions possible: Dr. Spencer got HIS OWN data wrong, or that Dr. Singer is correctly representing v5.4 of UAH

Larry, Singer's graph might have been v5.4 data, but his calculations with it definitely weren't and seemed to be based on some earlier, uncorrected version. What's the point of putting "v5.4" on a data chart if you're not using that data for your conclusions and, in particular, for a calculation you then claim is based on the data? He was either wrong or misleading.

You don't have to be young and on your game to know the planet is warming, or to read the trend number that UAH gives at the bottom of their data page.