"A decade of weather extremes" by Coumou and Rahmstorf

I've read most of the new paper by Coumou and Rahmstorf in Nature Climate Change ("A decade of weather extremes"), and it's very interesting but doesn't really address what I thought it would.

It has a lot of interesting numbers and references to papers that have studied extremes in various locales. But it seems to me you can always find extremes somewhere on the planet (more on that in my next post).

First, on the physical reasons why more extremes should occur in a warming world, they write:


"For some types of extreme, there are simple physical reasons why they would increase in a warming climate. If the average temperature rises, then obviously so will the number of heat records, all else remaining equal. Cold extremes will decrease, but if the probability distribution for temperature is shifted unchanged towards warmer conditions, the total number of extremes (hot plus cold) will increase. That is fundamentally because what is considered extreme is always based on past experience, and a change in climate moves us out of the familiar range.

"Warming will lead to more evaporation, too, and thus surface drying, increasing the intensity and duration of drought. Warmer air can also be expected to enhance precipitation extremes as it can hold more moisture. According to the Clausius–Clapeyron equation, for each 1 °C of warming, saturated air contains 7% more water vapour, which may rain out if conditions are right. Increased atmospheric moisture content also provides more latent energy to drive storms. Furthermore, the potential intensity of tropical storms increases with warmer sea surface temperatures, all else remaining equal.

"Such simple physical considerations thus lead us to expect certain weather extremes to increase in a warmer world. However, they are not sufficient to make firm predictions, because all else may not remain equal and a more detailed analysis is needed. First of all, to detect whether extremes have in fact increased, statistical analysis is required. For an attribution of extremes to a physical cause, modelling approaches can be used."

About heat extremes they write (with a lot of references to other papers):


"Recent years have seen an exceptionally large number of recordbreaking and destructive heatwaves in many parts of the world. Several recent studies indicate that many, possibly most, of these heatwaves would not have occurred without global warming.

"In 2003, Europe suffered its hottest summer by far for at least 500 years, with temperatures in Switzerland topping the previous record by a full 2.4 °C, equivalent to 5.4 standard deviations. Greece experienced its hottest summer in 2007, with summer temperatures in Athens exceeding the 1961–1990 mean by 3.3 °C, corresponding to 3.7 standard deviations. Australia’s worst bush fires on record, following an unprecedented heatwave, ravaged the country on the ‘Black Saturday’ of February 2009 (ref. 34). In 2010, central Russia suffered its worst heatwave since records began, with the July temperature in Moscow beating the previous record by 2.5 °C (ref. 5). Finally, in July 2011, the US Southern Plains were hit by a record-breaking heatwave.

"Several recent statistical studies show that the number of heat extremes is indeed strongly increasing. Starting with daily data, a recent study with global coverage shows a widespread (73% of land area) signififcant increase in the occurrence of warm nights (warmest 10% of nights)during 1951–2003. At present, about twice as many record hot days as record cold days are being observed both in the United States and Australia. Similarly, for Europe nearly 30% of the observed daily heat records are attributable to the warming climate. The length of summer heatwaves over western Europe has almost doubled and the frequency of hot days has almost tripled over the period from 1880 to 2005 (ref. 37). In the eastern Mediterranean, the intensity, length and number of heatwaves have increased by a factor of six to eight since the 1960s (ref. 38)."

But these are all anecdotal evidence, if you will, and the paper doesn't contain a single equation. I suspect you can always find regions that have extremes (next post). Coumou and Rahmstorf include this graph: 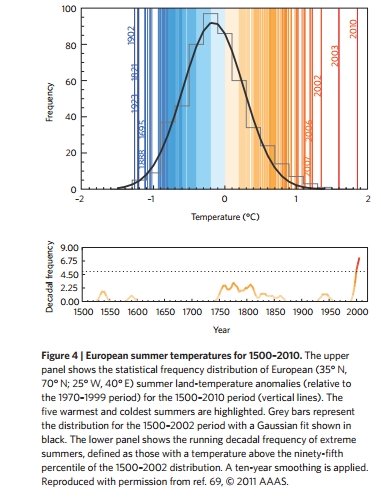 I agree (and I should think most skeptics would agree) that a warming world will lead to warmer weather and greater precipitation in the higher latitudes (e.g. longer growing season in Canada), melting ice and rising sea levels.

The above are supported by AGW science. Stronger storms (driven by delta T, not T) is not a prediction based on AGW science.