Joe Bastardi: Idiot, Liar, or Both?

This is simply incredible: Joe Bastardi says, on a major television network:

This is either profound ignorance or bald-faced lying. Media Matters has some reactions from climate scientists, such as


Kerry Emanuel of MIT: "Utter rubbish. Sorry to be so direct, but that is just the case."

Gavin Schmidt, NASA climatologist: "Bastardi is attempting to throw out 150 years of physics."

In fact, scientists have measured the distribution in the atmosphere, as William Connolley noted recently on WUWT. Here are some measurement, made over Antarctica (where there are no strong CO2 sources or sinks), from a 1995 paper in Tellus.

First is the variation with season at different altitudes in the troposphere -- it's at most 2 ppm (parts per million), out of a total of about 340-350 ppm -- less than 1%: 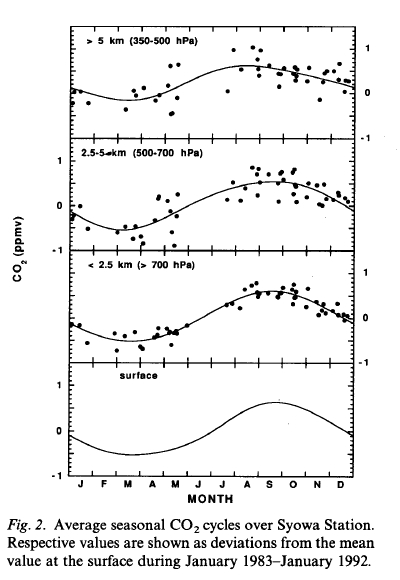 And here's the variation with height, averaged over one full year: about 0.3 ppm at most, or 0.1% 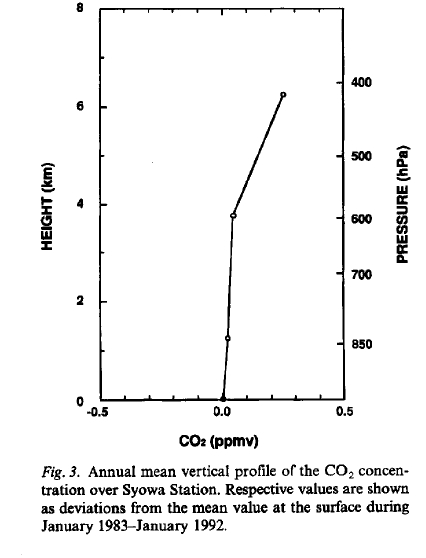 These plots represent the kind of hard, thankless work scientists do to establish what we know -- a result that isn't terribly surprising, either, because you can just measure CO2 levels atop mountains and at sea level and compare (though local CO2 sources might slightly affect the results), something that is done around the world. It involved planning an expedition to Antarctica, with all that entails, and flying instruments in planes, which sounds simple but was surely beset by cold and wind and snow and frozen fingers and teared-up eyes and finicky instruments and pilots blinded by the sun as they tried to fly an exact heading at an exact altitude. Nor is this the only such experiment -- the paper lists others in its References.

And then, after all that hard, careful work, some...creep...goes on television and shamelessly tells the whole world the exact opposite.

Now that is a useful idiot. Or a useful liar. Or maybe both.

Certainly not a "useful" idiot.

That particular talking point gets trotted out on occasion.

He is merely lying according to that particular schedule of recycling for that talking point. If it were in the schedule of lies to trot out, say, Cosmic Raaaaaays!!!!! again, he would lie with the cosmic ray talking point.

It doesn't really matter which lie these people use - there is a short list of lies, they are repeated, and they have all been refuted numerous times.

Simply state this lie was refuted numerous times and move on.

It would be helpful, though, if there was a central dataset that tracked the dates that they trotted out these lies in the past, so we could just say something like "you lied about this already, in 4/02, 6/04, 1/07, 10/08, 5/10. We aren't discussing this because nothing has changed from all the other times you coughed up this hairball."

Of course you're right Dano, and even though many people pointed this out to him at WUWT (the William Connolley link I gave), even some of the usual deniers, he repeated it again....

Sounds like Bastardi sits on the opposite fringe as Al Gore.

I think this is where most skeptics sit. Pretty typical of the reaction when (non-climate) scientists and engineers examine the CAGW evidence.

"Look, here’s how you can tell — to get back to your question. You compare the predictions of their “catastrophic” theory five, ten, twenty years back to the actual data. If there is good agreement, it is at least possible that they are correct. The greater the deviation between observed reality and their predictions, the more likely it is that their result is at least incorrect if not actual bullshit. That’s all. Accurately predicting the future isn’t proof that they are right, but failing to predict it is pretty strong evidence that they are wrong."
.........

"The latter is the story that is being widely told, to keep people from losing faith in a theory that isn’t working — so far — the way that it should. And I have only one objection to that. Keep your hands off of my money while the theory is still unproven and not in terribly good agreement with reality!

"Well, I have other objections as well — open up the debate, acknowledge the uncertainties, welcome contradictory theories, stop believing in a set of theoretical results as if climate science is some sort of religion… but we can start with shit-canning the IPCC and the entire complex arrangement of “remedies” to a problem that may well be completely ignorable and utterly destined to take care of itself long before it ever becomes a real problem."

I don't see how Bastardi can be "on the opposite fringe" to Al Gore, charlesH, unless you can name some extreme things he has come out with in a similar vein ? Al Gore would actually be right in the middle, along with the scientists and the consensus he agrees with, whereas most so-called skeptics occupy the fringe with Bastardi.
With regard to Dr Brown and his "'catastrophic' theory", do you know where he gets that idea from ? What does he mean by 'catastrophe', that he seems to be arguing against ?

Aside from the fact there are few - if any - modern climate "skeptics" any more,

Poor charles would rather believe some guy than actual results.

That is: poor charles, how do the major climate models do when hindcasting? Do tell!

"China will accelerate the use of new-energy sources such as nuclear energy and put an end to blind expansion in industries such as solar energy and wind power in 2012, Chinese Premier Wen Jiabao says in a government report published on March 5.
China will instead develop nuclear power in 2012, actively develop hydroelectric power, tackle key problems more quickly in the exploration and development of shale gas, and increase the share of new energy and renewable energy in total energy consumption."

Charles, are you wishing to claim that China is dropping renewables altogether so you can cheerlead about nuke?

I hope not. We're not gullible, y'know.

"Charles, are you wishing to claim that China is dropping renewables altogether so you can cheerlead about nuke?"

I posted this to encourage those concerned about co2 from coal plants. Since nuclear is the only energy source that has allowed countries to be low carbon in electricity generation (e.g. France) this should be good news.

Look at what is happening in Europe and the US (and China). Nuclear and nat gas will displace far more coal than wind/solar has or ever could. So even though wind/solar is in a free fall and CAGW is losing citizen support all is not lost.

charles, go to Powerline or something to peddle your hokum. It doesn't work anywhere where there are readers with more than two firing brain cells.

Charles: Regarding your link:

How accurately must future climate be predicted for contrarians like you to take AGW seriously? Over what time period? For which physical quantities?

And how do you account for the fact that projections made today use models with much greater resolution and much better physics than models used 10 or 20 or 40 years ago?

"How accurately must future climate be predicted for contrarians like you to take AGW seriously?"

a) I take AGW seriously enough now to support R&D (not production subsidies) for cleaner energy, (as you do).

b) I agree with Dr. Brown in the linked essay that the evidence for CAGW is very weak and not strong enough to support economy damaging carbon taxes et al.

c) If the models assumed a climate sensitivity of ~1oc (for which I think there is considerable evidence)then I expect they would project temps behaving like they are.

d) Bottom line is that temps are going to have to start going up consistent with a climate sensitivity of 3-4oc before I would support going beyond a) above.

e) My goal is cheap energy for the world's poor. Wind/solar/nuclear/ .... what ever, as long as it's cheaper than coal.

Thanks for answering. In the interest of discussion:

a) As the poor need more energy, does that mean you'd support a carbon tax on everyone else?

b) The UAH satellite measurements find a lower troposphere temperature increasing at 0.16 C/decade over the last 30 years. That's not enough evidence?

Also, models don't assume a climate sensitivity, they try to calculate it. They find about 2.0-4.5 C, and it's not clear this can be reduced much (I'll write more about that in an upcoming post.)

Thanks for answering. In the interest of discussion:

a) As the poor need more energy, does that mean you'd support a carbon tax on everyone else?

ch In general I support taxing things one wants to discourage and since burning FF does generate pollution (not co2) and I like Hansen's rebate approach and I don't like being dependent on foreign oil and ....... so maybe.

b) The UAH satellite measurements find a lower troposphere temperature increasing at 0.16 C/decade over the last 30 years. That's not enough evidence?

Also, models don't assume a climate sensitivity, they try to calculate it. They find about 2.0-4.5 C, and it's not clear this can be reduced much (I'll write more about that in an upcoming post.)

ch Models back fit and then project and the projections have been high thus the back fit 2-4.5 is likely high ........

Charles: Wind and solar energy are certainly not in "free fall" -- more of both are being produced than ever before.

Leftist warmists doing what they do best ... engaging in civility. Thanks, David, I'll ramp up my own rethoric accordingly; it's always best to echo the style of people you converse with. Arsehole. Oops, sorry.