Besides the short length of my records, another problem with my earlier calculation of the probability of a certain 7-day extreme in heat or cold is that Oregon has relatively placid weather with relatively little variation. (Frankly I find it boring -- few storms, fewer thunderstorms, few windstorms, no heavy snowfalls, no n'easters, no hurricanes, etc.)

But New Hampshire did have a lot of variation, and it's much more representative of where this recent heat wave took place. If you're interested in weather you can't do much better than New England, which just about has it all.

Luckily, I kept my weather records from my days in New Hampshire. (Yes, I'm that kind of person.)

Speaking of which, Lake Winnipesaukee, which I lived above (and, of course, off a little to the side) just had their earliest "ice-out" in their records. Ice-out is when the Mt Washington, a ship that sails the Lake, can get into all seven ports it visits. It's a big deal, because by then residents of the Lake Region are climbing the walls with cabin fever, and ice-out means you can at least start to hope that winter might someday end. (It's not quite as bad as Vermont, where the unofficial motto is "Vermont: Nine months of winter, three months of bad skiing." Their other unofficial state motto honors the well-known song while speaking truth about the state's meager economic opportunities: "Moonlight in Vermont - or starve." New Hampshire has too much "Live Free or Die" pride to complain like that -- plus they're closer to Boston.) 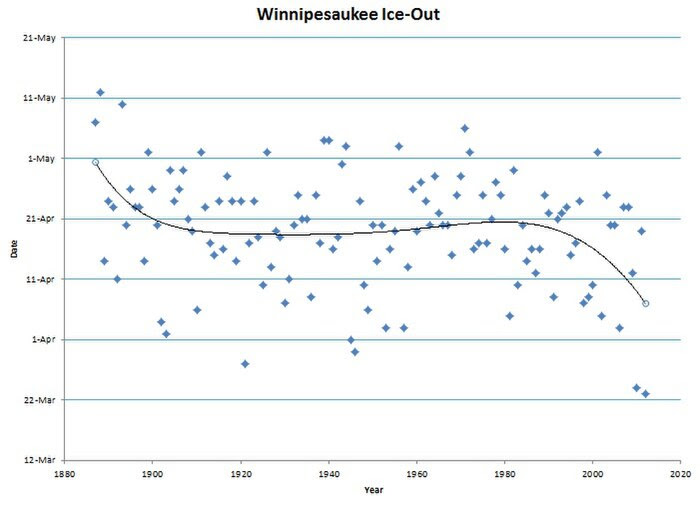 The Lake Winnipesaukee ice-out record starts in 1880 and the ice-out date has been moving forward for decades, as shown on the right.

Anyway.... I looked at my weather records for Gilford, NH, which spans 4.7 years.

Incidentally, the normal annual range (difference between the warmest normal day and coldest normal day) is 50.0°F in New Hampshire, but only 28.5°F in Oregon.

Again I looked at the 7 consecutive day averages and compared them to the normals. Here's the result, compared to Scappoose, Oregon. Sure enough, New Hampshire has more variable temperatures:

That number, 23,000 years, still looks unbelievable, but it looks much less unbelievable than my earlier number. (But in this case "less unbelievable" doesn't necessarily mean "more believable.") Anyway, this analysis is probably all crap and someone who knows what they're doing surely has better answers, and I've likely just wasted my time (and yours--sorry).
Posted by David Appell at 3/25/2012 06:59:00 PM