Crop Yields and Drought: Not that Simple 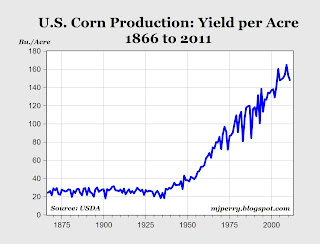 Anthony Watts has a post about the increase in corn yields -- up by a factor of about 7 since 1930 -- as if to say there's no need to be concerned about today's drought.

It's not that simple, of course. The US population has increased by a factor of 2.6 since 1930; the world population by 3.3. And new farmland is ever harder to come by. There's been a 10% increase in US corn acreage in recent years, mostly due to the demand for ethanol. Mark Perry wrote last year: 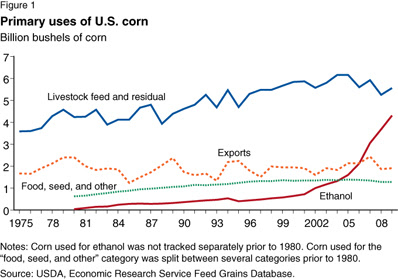 With people now (1) more abundant, (2) eating more calories, (3) eating more meat (which uses up crops and water fast), (4) using corn for fuel, there have to be to higher yields. Counting on them to counter drought and higher temperatures is risky -- and it's important to keep in mind that many farmers in the world don't have access to the level of technology that US farmers do. (So once again, looking at climate change as it applies just to the US is very myopic.)

A 2007 study by Lobell and Fields didn't look at corn but at six other crops, found that, all else being equal higher temperatures have decreased yields, just about offsetting higher yields from enhanced CO2 fertilization. They estimate the 2002-2007 global losses at about $5 billion per year. A recent study by Lobell found maize and wheat production declined by 4-6% in 30 years due to higher temperatures (that is, declined from their level in the absence of climate change).

Of course, all else is never equal. But counting on them being unequal in the direction you need is risky.

A recent study by Lin and Huybers found that wheat yields have leveled off in many regions. They write:


"Recent studies (Kalra et al 2008, Lobell et al 2011) also indicate that warming in Bangladesh and India have reduced wheat yields by approximately 20% of their average trend since 1980 (Lobell et al 2011). The deleterious effects of climate change may be expected to decrease yield potential and, coupled with yields already near their maximum potential, may have contributed to the observed leveling in India and Bangladesh. Western European wheat yields were also found to have incurred disproportionate losses from regional warming (Lobell et al 2011) and may be near their yield potential (Licker et al 2010), suggesting that similar factors as discussed for Bangladesh and India may have acted in conjunction with policy changes to cause leveling in that region."

Cavalier conclusions about the very things that keep us all going don't help anyone, and are more intended to score a point for your side than illuminate a complex situation.
Posted by David Appell at 7/26/2012 10:47:00 AM