About Gas Prices (No, They're Not Higher)


"I was wrong," Gingrich said on CNN's "Starting Point with Soledad O'Brien" Wednesday morning. "I think you're going to find that whether it's Michael Barone or Karl Rove, the whole group of us, we all thought we understood the historical pattern and the fact that with this level of unemployment, with this level of gasoline prices, what would happen."

This is more "Republican math" done to make themselves feel better, because gas prices have not been much higher under Obama -- just 5%.

I took the weekly national average price of gas from the EIA's "This Week in Petroleum," and adjusted it for inflation via the Consumer Price Index. Here are the results for the last five administrations: 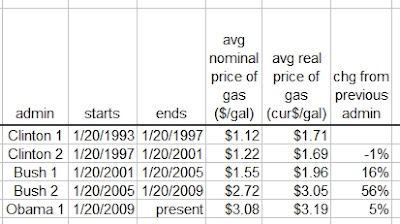 It is false that gas prices have been a lot higher under Obama -- the real increase is only 5%. On the other hand, the increase during Bush's first administration was 16%, and 56% during his second administration.

Don't believe me? The Washington Post has this chart: 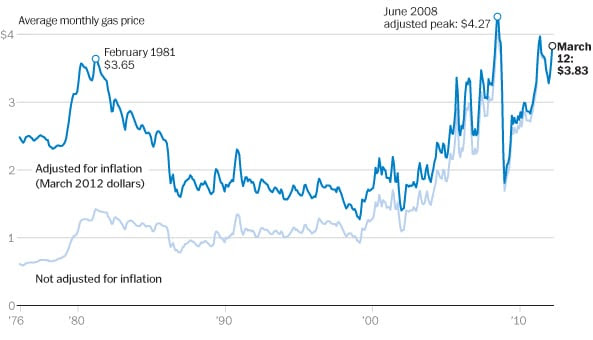 Who knows where gas prices are going, but under Obama they have been just a sliver higher than under Bush. But you do have to wonder if it's just coincidence that gas prices jumped upward as they did during the eight years two oilmen ran the country.
Posted by David Appell at 11/09/2012 07:16:00 PM