The best way to follow election day may be via Intrade, where traders buy and sells shares on a Obama or Romney victory. While it's unlikely most traders there have real inside information (but some might), many are no doubt glued to media and trading quickly on any news and rumors. This link can be set up to autorefresh. 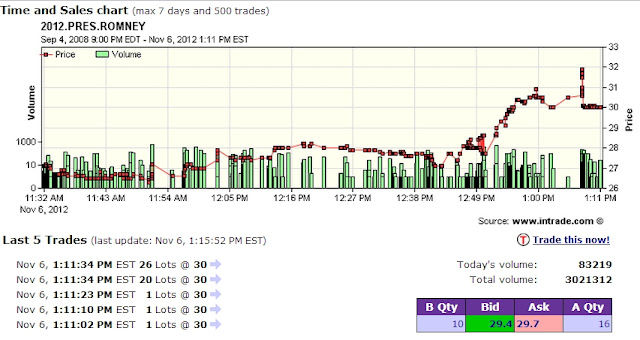 Oregon votes by mail, and personally I miss going to a polling booth. It was one day, at least, where you definitely felt like part of a community, part of the country, part of something happening. In New Hampshire it was especially fun, because (especially for the primary) there were often TV cameras out front and people doing exit polling (I always declined).

It's time to spread the primary love around the country (and yes, I felt that way when I lived in NH). Also, it's time to end the electoral college. Obama will surely win Oregon, so my vote (if it were for him) would hardly count.