Mark Fischetti at Scientific American lays out a case for why Hurricane Sandy was influenced by (but not due to) climate change (similar to Neven's comment):


"They are emboldened because researchers have gotten very good in the past decade at determining what affects the variables that create big storms. Hurricane Sandy got large because it wandered north along the U.S. coast, where ocean water is still warm this time of year, pumping energy into the swirling system. But it got even larger when a cold Jet Stream made a sharp dip southward from Canada down into the eastern U.S. The cold air, positioned against warm Atlantic air, added energy to the atmosphere and therefore to Sandy, just as it moved into that region, expanding the storm even further.

"Here’s where climate change comes in. The atmospheric pattern that sent the Jet Stream south is colloquially known as a “blocking high”—a big pressure center stuck over the very northern Atlantic Ocean and southern Arctic Ocean. And what led to that? A climate phenomenon called the North Atlantic Oscillation (NAO)—essentially, the state of atmospheric pressure in that region. This state can be positive or negative, and it had changed from positive to negative two weeks before Sandy arrived. The climate kicker? Recent research by Charles Greene at Cornell University and other climate scientists has shown that as more Arctic sea ice melts in the summer—because of global warming—the NAO is more likely  to be negative during the autumn and winter. A negative NAO makes the Jet Stream more likely to move in a big, wavy pattern across the U.S., Canada and the Atlantic, causing the kind of big southward dip that occurred during Sandy." 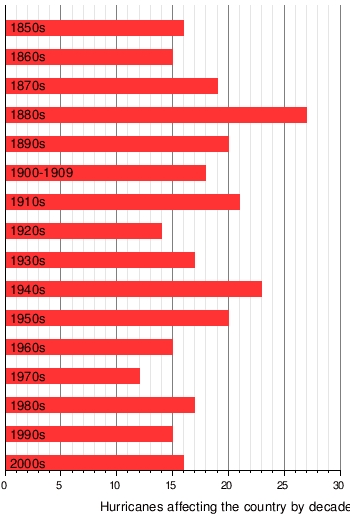 I am really skeptical about these kinds of chained arguments about very complex systems -- it seems to me you can string a few such ideas together to prove anything, and the systems are so complex no one can prove you wrong (or right). Here's an example.

And where was this argument in any of the recent years when no major hurricanes hit the U.S.? These kind of arguments only get made after a storm, never before them.

Justin Gillis's article in the New York Times strikes me as more balanced on this subject:


"Was the bizarre storm called Sandy a product, in whole or in part, of human-induced climate change?

...The first thing to say is that climate scientists are just not in a good position to answer it yet.

Some of them are already offering preliminary speculations, true, but a detailed understanding of the anatomy and causes of the storm will take months, at least. In past major climate events, like the Russian heat wave and Pakistani floods of 2010, thorough analysis has taken years — and still failed to produce unanimity about the causes."


"Kevin E. Trenberth, a scientist with the National Center for Atmospheric Research in Boulder, Colo., said that natural variability very likely accounted for the bulk of that temperature extreme. And many of Sandy’s odd features derived from its origin as a “hybrid” storm — a merger of several weather systems, including a hurricane and a midlatitude storm that had earlier dumped snow in Colorado.

“My view is that a lot of this is chance,” Dr. Trenberth said. “It relates to weather, and the juxtaposition of weather systems. A hybrid storm is certainly one which is always in the cards and it’s one we’ve always worried about.” "But, he added, human-induced global warming has been raising the overall temperature of the surface ocean, by about one degree Fahrenheit since the 1970s. So global warming very likely contributed a notable fraction of the energy on which the storm thrived — perhaps as much as 10 percent, he said."

It's just not possible to look at one storm and envision that 10%, given the wide distribution in storm strengths (which I'm guessing is a normal distribution). You couldn't do it with a storm that is 10% less than average strength, either.

I'm certainly open to the idea that someday -- perhaps in a couple of decades, perhaps a little sooner -- scientists will be able to say, a month or two weeks before a major hurricane, that models show conditions are primed for a major hurricane in a certain region, due to anomalously warm SSTs and a blocking pattern set up by melting ice, and that coastal states should put their citizens and disaster agencies on notice. (Whether they would do so if the Italian's crybaby retribution goes worldwide is another matter.) Predictions that come true make believers out of nearly everyone.

And where was this argument in any of the recent years when no major hurricanes hit the U.S.? These kind of arguments only get made after a storm, never before them.

Do you not think it's more likely to be the case that you only hear about these arguments after a major storm, regardless of the how often they are actually made.

Looking back at the 2012 melting season, I find it difficult to believe that there will be zero consequences. But it's still too soon to say anything conclusive about those potential consequences. It took a while for smoking to get conclusively connected to lung cancer as well.

So I don't know about you guys, but I'm on the look-out for those weird/rare winter weather events.

And then the next melting season, which will hopefully end up above 2012, and if possible, above 2007 as well.

Neven: I'm open too to the idea there's a connection -- but not a binary one, where Sandy was caused by AGW and wouldn't have occurred otherwise (or been as bad). These phenomena exist on a continuous spectrum.... Bottom line is, I just don't see that science can, in its present state, prove an influence one way or the other, and in that sense this is a meaningless argument.... I trust that climate scientists will be pouring over data about this storm and the surrounding atmospheric and oceanic conditions in recent months, and have something more definitive to say in a year or two. (Though I suspect even that won't settle the matter; it didn't regarding the Russian heat wave.)

There's that "blocking high" again. Mike Lockwood had a paper a few years back linking low solar activity to blocking highs in the North Atlantic that routine led to harsh British winters.

and have something more definitive to say in a year or two.

And then they can probably continue straight away to explain the stuff that happens in those two years.

Really? Did Sandy make landfall in the UK during winter?

Mike Mangan, don't you have someone to Swift Boat or a report to plagiarize? Much more useful than testing your mendacious arguments here.

My old punching bag, Dano, with nothing to contribute as usual. As my sainted grandfather used to say, fuck off Dano!