Is the Hockey Stick a Surprising Result? 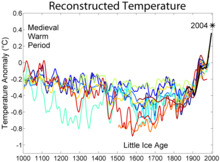 Is the hockey stick a surprising, unexpected, or obviously false result, with its sharp upward swing in surface temperatures about 1850 A.D.?

I don't think so. There are lots of other hockey sticks around -- for population, for energy use, for emissions. So how do they add together and what do they imply for temperature?

Surface temperature change is proportional to the rate of forcing change

where λ is the climate sensitivity, or, for the change in time

If you do the derivatives

and so on, with the past concentration (C) of CO2 changing super-exponentially (so the rate of forcing changes approximately exponentially), then surface temperature would have been changing exponentially too, seen over a couple of centuries.

Given these, the hockey stick's exponential rise in temperature, viewed over the last few centuries, is not especially surprising or unexpected.

Of course, this is just a heuristic argument. Doing the Mann et al. calculation is the only way to get the real function Ts(t). But it seems to me the sharp upward rise of the hockey stick circa 1850 - 1980 is not really surprising from a heuristic point of view. Given the laws of physics and the world's history of energy use, it would probably be more surprising if the hockey stick wasn't true.
Posted by David Appell at 2/13/2014 10:11:00 AM

IIRC Gus Speth's latest book has a page in the front matter with maybe two dozen graphs of different indicators, all of them in the hockey stick shape. He uses these small graphs throughout the book as section-chapter breaks.

As long as I am logged in, David, could you find it in your heart to do two things for the scientists out here:
1. Stop splicing two kinds of data together in your plot here. I am trying to teach university students that they should not use "tricks" like this to create false visual impressions. Several have pointed out to me your page. I, of course, use your postings as an example of what scientists should NOT do, but it is embarraasing that you keep ... on ... doing ... it, long after this trick is called out.
2. Would you stop calling the long agreed temperature history of earth (reproduced in your plot) a "hockey stick"? The "hockey stick" was a Mann98 error that had a constant temperature throughout the MWP and LIA. Everyone in the business knew it was wrong the day it came out because it did not show the MWP, which had overwhelming attestation (even then). What you are showing is simply an up and down. Let us call it a roller coaster.
It is possible that human-generated CO2 could cause a problem. However, the fact that you constantly resort to these two rhetorical "tricks" suggests that the case is not really very strong.

And don't get me started on your "arguments by analogy", which is the essence of your post here.

Re #1: No. Putting different data on the same chart is a convenient way to save space and communicate information.

Re #2: No. The hockey stick has veen verified now by many different groups, some of them using completely different mathematics.

What is the evidence for a global MWP? You pretend you're a scientist, but never provide evidence like real scientists do.

In particular, the recent PAGES 2k consortium found no evidence for a global MWP:

No, it is a convenient way of deceiving people who do not look closely. It is a convenient way to avoid mentioning the problem that certain proxy data do not work for the last half century. It is, in the book title "lying with statistics".
You need to take a science course so that you learn why scientists (real scientists) do not indulge in these rhetorical tricks.

And, as Galileo would say (under his breath, no doubt, for fear of being sued by the political class). "It is still NOT a hockey stick". Because it does not have the MWP and LIA at the same time.

So where is YOUR evidence for a global Medieval Climate Anomaly?

Then:
Stop ... splicing ... two ... kinds ... of ... data ... using ... the ... rhetorical ... "trick" (their words, not mine) to "hide the decline).
(that is, remove the black line).
Then you will see that:
1. by the various proxies used, today is about as warm as the MWP.
2. the current warming started before human CO2 release became significant
3. The rate of change is no greater/smaller today than before (although the problems of precision and scale remain).

Now, none of this has any relevance to the question at issue: It is still possible that human-released CO2 might be a problem.

You don't have any evidence for a global MCA, do you?

The black line belongs on the chart just where it is, since proxy temperatures and instrumental temperatures were calibrated over a common period.

Here's how you can tell them apart: One is black. The others are not.

CDIAC estimated that CO2 emissions from land use changes were about 0.5 GtC in 1850, where their study begins:
http://cdiac.ornl.gov/trends/landuse/houghton/1850-2005.txt

Land use changes didn't start in 1850. Given the decades before, it could easily have added up to a few 10s of GtC.

And that doesn't count Ruddiman's hypothesis of significant early GHG emissions from agriculture.

I thought that Rosenthal et al showed the medieval warm period and the little ice age were global.