The Pause That Ain't

Tamino has been making a strong case that the trend of surface temperatures isn't any different than it has been since 1975, except for some ordinary fluctuations about the trend. He's giving away his graphs for free, and they're worth reproducing.

Here, in 5 short steps, is his proof that there is no pause.

First, take the Cowtan & Way data for surface temperatures, which is HadCRUT4 infilled by kriging. (This is a nice introduction to kriging, if you're looking for one.) 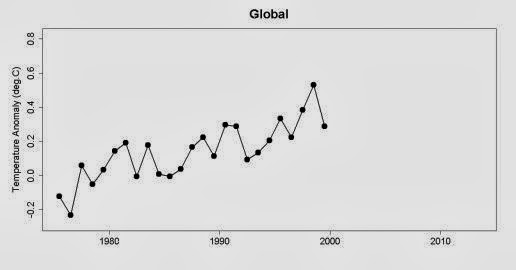 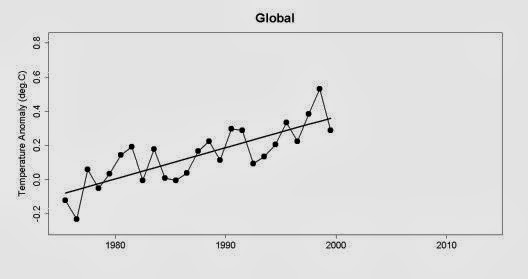 and the uncertainty of that trend: 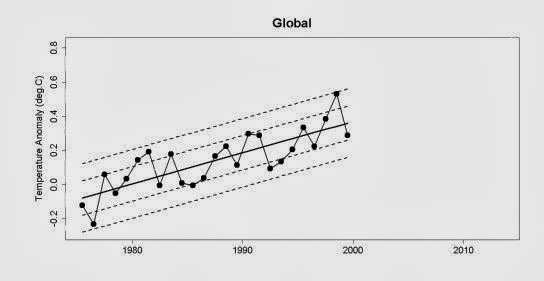 Project these trend lines to the present: 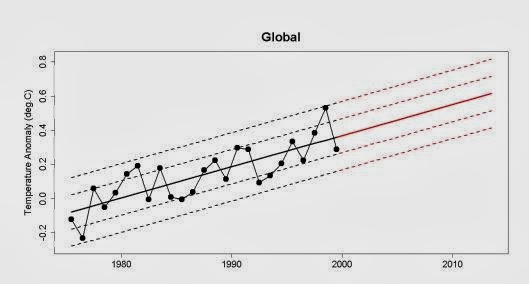 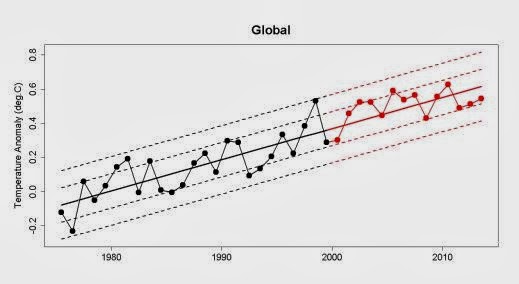 What you see is that the present (last) anomaly is not even one standard deviation below the 1975-2000 trend. No different than it's often been before.

It's hard to make it more clear than this. By calculating the trend only "since 1998" or only "for the last 17 years" or the like, with nonkriged data, you're only presenting a piece of the picture -- a highly selected piece -- a picture where the early data is above the long-term trendline, and the later data is below the long-term trendline. (And not even below it by that much.) It's the SkS escalator graph but looking just at the last step.

How interesting. Tamino and Gavin Schmidt have, in my experience, usually been on the same "side" of the temperature index questions. The recent paper in Nature's Geoscience by Ben Santer, et al, (including Schmidt) begins the abstract right up front addressing the slower rate of warming since 1998, and postulating various causes.

One must trust that the "slow down" won't turn into a "turn around". Or, should one hope for that?

J Melcher: What dataset are Santer et al working from?

Answer: "Our analysis uses satellite measurements of changes in the temperature of the lower troposphere (TLT) made by Microwave Sounding Units (MSU) on National Oceanic and Atmospheric Administration (NOAA) polar-orbiting satellites."

Note that the RSS dataset doesn't even measure above 82.5 deg N latitude.

(I'm not sure about UAH, and don't have time to figure it out now. Maybe you can tell us.)

Ah, well that is helpful. I had the impression that Santer and Schmidt didn't actually need ANY natural data, having so much extracted from the various climate simulators available.

"We show that climate model simulations without the effects of early twenty-first-century volcanic eruptions overestimate the tropospheric warming observed since 1998. In two simulations with more realistic volcanic influences following the 1991 Pinatubo eruption, differences between simulated and observed tropospheric temperature trends over the period 1998 to 2012 are up to 15% smaller, with large uncertainties in the magnitude of the effect. "


And please correct me if I am wrong, but I had the impression that because we were talking about the "green house effect" that long wave emission reductions, in the tropics and high in the troposphere, were the change of interest, rather than changes in the arctic or near the surface. The "hot spot", in the shorthand of the discipline, should, I thought, show up exactly where Santer is looking -- because it does in the models.

But perhaps you know more about it.

One must trust that the "slow down" won't turn into a "turn around".

There is not a hint of any physics that this will happen.

The "hot spot", in the shorthand of the discipline, should, I thought, show up exactly where Santer is looking -- because it does in the models

From Fu et al GRL (2011):
"One of the striking features in GCM‐predicted climate change due to the increase of greenhouse gases is the much enhanced warming in the tropical upper troposphere. Here we examine this feature by using satellite MSU/AMSUderived
deep‐layer temperatures in the tropical upper‐ (T24) and lower‐ (T2LT) middle troposphere for 1979–2010. It is shown that T24‐T2LT trends from both RSS and UAH
are significantly smaller than those from AR4 GCMs. This
indicates possible common errors among GCMs although we cannot exclude the possibility that the discrepancy between models and observations is partly caused by biases in satellite data."