Even though much of the warm water that was in the equatorial Pacific has dissipated, NOAA still puts the chance of a moderate El Niño later this fall and early winter at 65%:


Over the last month, model forecasts have slightly delayed the El Niño onset, with most models now indicating the onset during July-September, with the event continuing into early 2015 (Fig. 6). A strong El Niño is not favored in any of the ensemble averages, and slightly more models call for a weak event rather than a moderate event. At this time, the consensus of forecasters expects El Niño to emerge during August-October and to peak at weak strength during the late fall and early winter (3-month values of the Niño-3.4 index between 0.5oC and 0.9oC). The chance of El Niño has decreased to about 65% during the Northern Hemisphere fall and early winter....

Their model projections for the Niño3.4 region are above. Except the latest Nino3.4 anomaly is already negative: 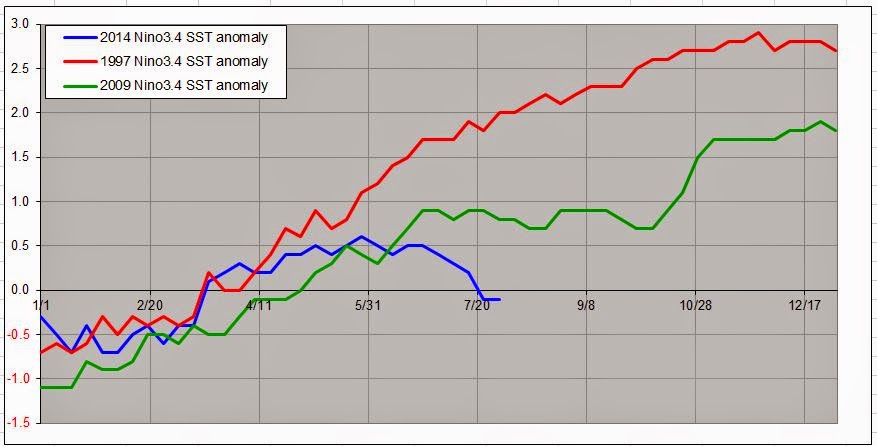 Why does it matter? Because an El Nino could bring lots of rain to California this winter, writes Paul Rogers in the San Jose Mercury News, who also quotes some pessimistic scientists, including this one:


"It takes big droughts to make big changes in water policy in California," Lund said. "It would cinch the deal if we have another dry year."