A NOAA report shows the large increase in "nuisance" flooding in the last 50 years. 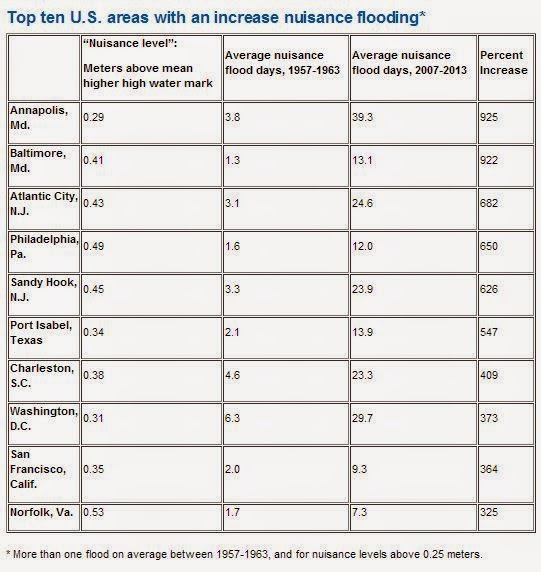 "Nuisance flooding" means "public inconveniences as frequent road closures, overwhelmed storm drains and compromised infrastructure." Like that time you couldn't get to your grandma's for Easter dinner, so you returned home and made do with a Spam sandwich.


This nuisance flooding, caused by rising sea levels, has increased on all three U.S. coasts, between 300 and 925 percent since the 1960s.

The chart gives the top ten areas where such flooding has increased. Increased not just a little bit, but by 4 to 10 times. Most are near the Atlantic hot spot, but Port Isabel, Texas and San Francisco made the list. (The misery must be spread around a little bit.)

Of course, it will only get worse:


“As relative sea level increases, it no longer takes a strong storm or a hurricane to cause flooding,” said William Sweet, Ph.D., oceanographer at NOAA’s Center for Operational Oceanographic Products and Services (CO-OPS) and the report’s lead author. “Flooding now occurs with high tides in many locations due to climate-related sea level rise, land subsidence and the loss of natural barriers. The effects of rising sea levels along most of the continental U.S. coastline are only going to become more noticeable and much more severe in the coming decades, probably more so than any other climate-change related factor.”

This might be a good time to buy a new pair of waders, while supplies last.

Or at least put another round of waterproofing on your boots. 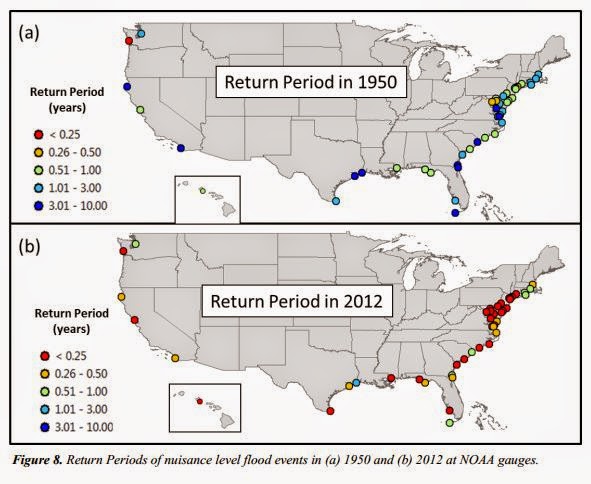 Is there any aspect of this that would have to do with lack of information during the earlier period? The other issue has to do with changing of infrastructure in ways that might artificially increase the amount of flooding by increased channeling of waterways?
In the opposite direction are their aspects to modern flood management and buildings etc that would lead to less flooding