Political Ideology & Who Vaccinates (and Who Doesn't) 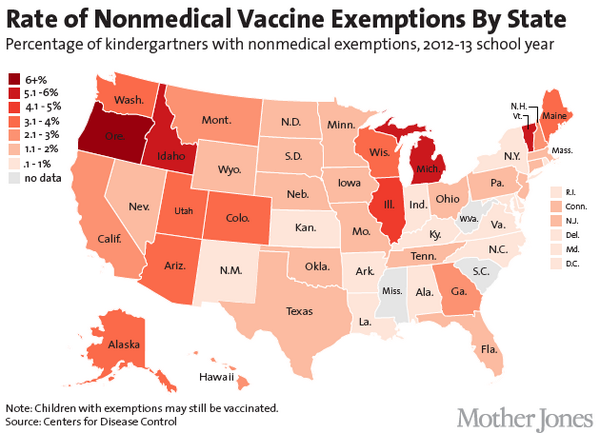 Keith Kloor discusses this state-by-state data on nonmedical vaccine exemptions, in the context of a dumb message twittered by Mother Jones.

For me, it's more interesting that Oregon leads the nation in vaccine exemptions. Why would that be?

In the comments on Keith's blog, someone makes a good point:


Perhaps there are less "alternative" doctors in the bible belt. It may just be that bible belt doctors play it by the book. There would be nobody to give the parents bad advice even if they sought it out...

I think there might be something to that -- or that conservatives in conservative states play it by the book, and are less likely to fall for fashionable scientific ideas (anti-GMO comes to mind, and climate change, which, whatever the science, undoubtably has a 'fashionable' angle to it) than liberals. (Idaho and New Mexico would seem to be exceptions, though.)

Meanwhile, in the dark red states of Oregon and Vermont, you can't swing a stethoscope without hitting a naturopath, alternative healer, vegan therapist or specialist in Chinese medicine.

When and where I grew up -- when the US was more of a conservative, white bread, Chevy-driving, baseball and apple pie nation -- before the hippies and Richard Nixon ruined everything -- it would have been unthinkable to question your doctor on what vaccines your child would receive. (I still remember, as a 6 or 7 or 8-year old, going to the VFW one evening and waiting in a line to get a sugar cube in a small white paper cup, which I think contained the vaccine for polio). Other than that, we all got measles, German measles, chickenpox and the mumps when they came around. But I'm sure my mother and my aunts didn't question other vacccines when we went to Dr. Spino in Greensburg -- he was the doctor and he knew best and you did what he said.

Aside: Everyone went to Dr. Spino -- all my siblings and cousins -- and when he was done he let you pick a lollipop out of a jar. I just googled him and found (!) that in 2011 he won a Congressional Medal of Honor


"for a lifetime's commitment to treating children, often not charging those who cannot afford health care and saving tens of thousands of lives."

He certainly deserved it.... Anyway, to the extent that conservatism reigns in a region, I'm not really surprised it would have high vaccination rates, and that the crunchy free-thinking liberals (mostly) don't. There are enough anti-scientific sentiments out there to spread evenly over the political spectrum.

Added 8/7: Although The Economist now ranks Portland as only the 12th-most liberal city in the US:

I lived six years in Oregon. Beautiful state. They are also the only state where you can't pump your own gas.

I think many in Oregon have a distrust of technology (e.g. vaccines, gmo, nuclear energy, ....). Back to nature.

You also can't pump your own gas in New Jersey.

Which is quite fine with me; I'd rather not do it anyway.