Guess How High the GISS Temperature Was in September


First, let us pay homage to The Pause.
Giver of posts.
Sustainer of temps.
Antagonist of catastrophic alarmists everywhere.
Remember The Pause,
Keep faithful to The Pause,
Be steadfast with The Pause,
and, no matter what, keep pushing The Pause.
Amen.

(You may now replace your hats.)

GISS's number for September's global temperature anomaly is +0.77 C -- the warmest September in their records, which begin in 1895.

August of this year was also #1 among all Augusts everywhere. That's just an astronomically rare coincidence.

But September 2014 was only the 7th-warmest of any month in their dataset. The southern hemisphere was 4th, and the northern hemisphere a paltry 61st (of 1,616 months). Notice the three 6's there -- that clearly means it's soon going to be as cold as Hell. Or something.

The last 60 months (5 years) are the warmest in GISS's archive, as are the last 120 months, but that always happens right before a temperatures plunge. 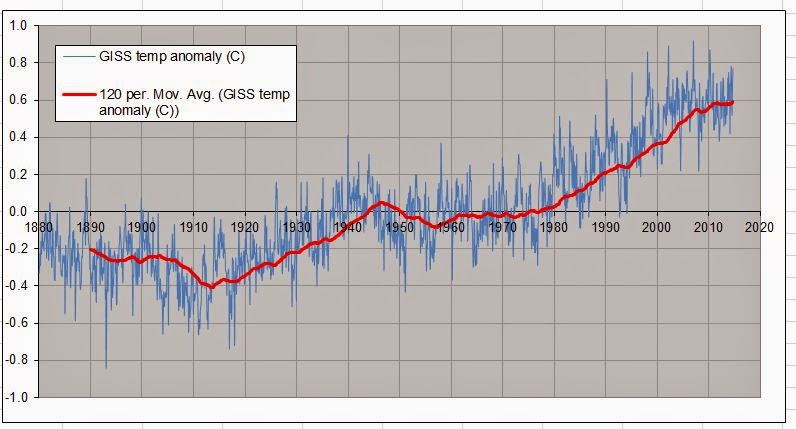 Some parameters on the graph above would be helpful.

You're right. I didn't notice that, thanks.

I've added my own graph at the bottom of the post.

GISS doesn't include axis values on any of their surface temperature graphs on this page:
http://data.giss.nasa.gov/gistemp/

GISS does have properly labeled graphs on this page:

I've just tracked that original graph down because someone posted it at RC -- it's popular with the denial crowd because they can attribute it to GISS. Gavin pointed out there that it's decade-old info.

Google image search found it for me. It's the thumbnail image from the navigation button on the GISS home page, meant to be clicked to get to the page for the current graphics info.

I tried nudging them to get their webmaster to update it.