GISS's number for the February global surface anomaly is +0.79°C, which is the 2nd-warmest February since 1879 and the 7th highest of any month's anomaly since then.

And this past meteorological winter (DJF) is tied with 2007 for the warmest ever.

And so on and so forth. The last 12 months are the warmest 12 months in GISS's record, already 0.03°C above the record year that just ended with Dec 2014.

If for some reason you need to know the 18-year warming, maybe to mail to your Congressperson a few thousand times, it's +0.15°C.

And although you shouldn't talk about climate change over the last 10 years, if you wanna...


Judith Curry, June 2013: "Attention in the public debate seems to be moving away from the 15-17 yr ‘pause’ to the cooling since 2002 (note: I am receiving inquiries about this from journalists)."

...the 10-year trend is presently +0.04°C/decade and rising fast -- just six months ago it was slightly negative. When the journalists were asking Judith Curry in June 2013 it was all of -0.01°C/decade.

I hope the same reporters are calling her back now asking what's going on. I hope they hear something about statistical significance.

Oh yeah: in late February I predicted that GISS's number would be 0.82°C based on the daily U of Maine Climate Reanalyzer number. So that was not too shabby.

And if people start complaining about how cold it was in New York or Boston, so how can the February anomaly have been so warm, remember this from Feb 15th, which looks a lot like the GISS anomaly map above: 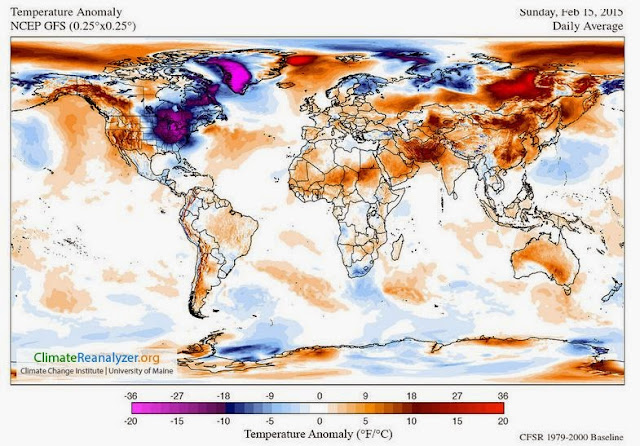