Patrick Moore Gets Called Out, Storms Out of Interview

@EcoSenseNow
Patrick Moore gets called out on one of his scientific claims, and so storms out of the interview.

Moore was being interviewed by a French TV channel, about the recent claims that glyphosphate -- the weed killer "Roundup" produced by Monsanto -- is unsafe and recently listed as a probable carcinogen by the World Health Organization.

He said he'd be "happy" to drink some of it -- and the brilliant French jounalist called him on it, saying they had some with them.

Dr. Moore quickly refused to back up his words, and stormed out, calling the interviewer an "idiot." The transcript: 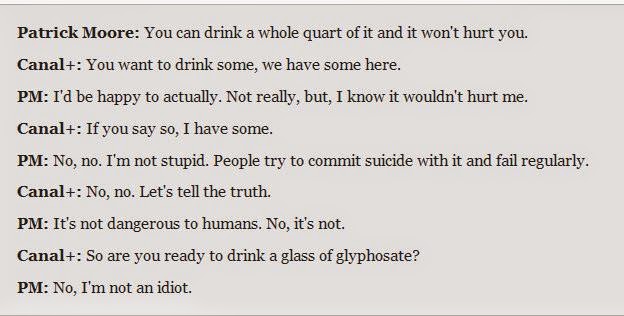 So now you know how good Patrick Moore's word is-- not very good at all. But that's not surprising.

But hey, give him a break -- it's not easy being a corporate sellout.