There is an important paper published in Nature today:

Since it puts an economic model atop a climate model, I'm automatically somewhat dubious. The climate models have enough uncertainities. Economic models have so much uncertainty that modelers there don't even try to establish error bars or confidence intervals. Or at least it seems that way to me, with my quite limited knowledge of economics.

For example, suppose you wanted to project U.S. GDP to the year 2100. Here are the historical data, from FRED: 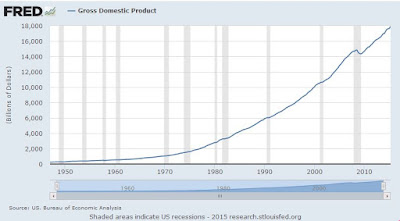 If you were to project GDP in 2100 based on the historical values from before the Great Recession, 1950-2008, you'd clearly get a number that is much bigger than if you project from using the full 1950-2014 data.

I should put up a nice little graph here showing this. Bad blogger. Instead I'll just use this: 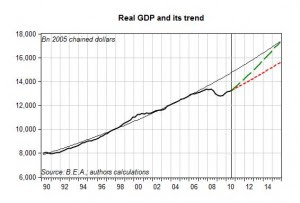 The point is, economic projections seem to have at least as difficult time anticipating nonlinear events, like the Great Recession, as do climate models based on the well-established laws of physics.

"...overall economic productivity is nonlinear in temperature for all countries, with productivity peaking at an annual average temperature of 13°C (55°F) and declining strongly at higher temperatures. The relationship is globally generalizable, unchanged since 1960, and apparent for agricultural and non-agricultural activity in both rich and poor countries. These results provide the first evidence that economic activity in all regions is coupled to the global climate and establish a new empirical foundation for modelling economic loss in response to climate change." 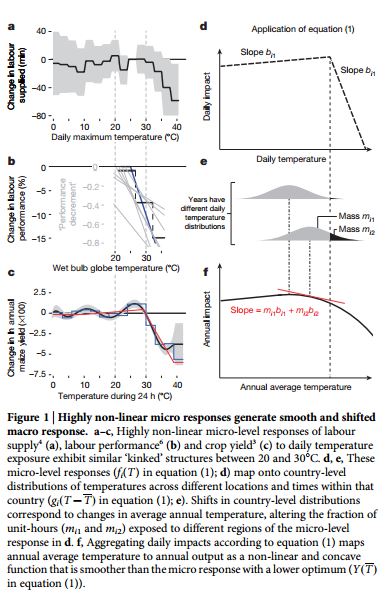 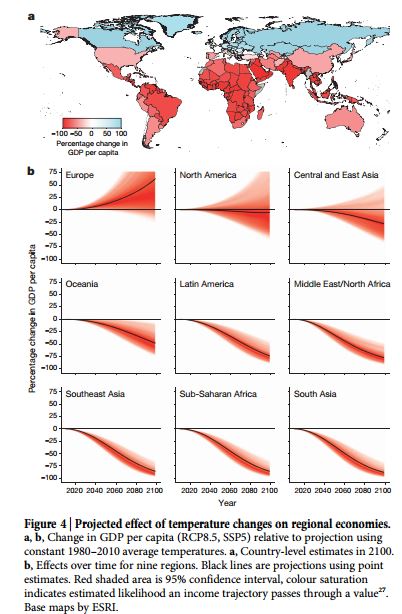 Europe wins big. So do Canada and Russia.

The US loses between 0% and 50% of per capita GDP. That's a big range, but big consequences if you're on the wrong side of it. (Consequences I find difficult to imagine near the 50% side. I'm spoiled by the times I've lived in.)

China loses more. This is why the Chinese will want (and are wanting) to stop global warming -- not from the goodness of their hearts, but because they know they are vulnerable to it.

And -- same old same old story -- the poor get slammed.

Perhaps you can consider these the best case scenarios? Are there nonlinear economic events that are positive, not, like the Great Depression or Great Recession, negative? I can't think of one...perhaps the aftermath of WWII, at least for the US, certainly not many countries. It seems economies hum along at an exponentially increasing rate until they stutter and miss a step, a step that is almost impossible to catch up on.


"If societies continue to function as they have in the recent past, climate change is expected to reshape the global economy by substantially reducing global economic output and possibly amplifying existing global economic inequalities, relative to a world without climate change. Adaptations such as unprecedented innovation or defensive investments might reduce these effects, but social conflict or disrupted trade—either from political restrictions or correlated losses around the world—could exacerbate them."

What makes this paper scary is the fact that they studied how GDP changed in the past when the temperature rose and fell and the evidence is very strong that warming temperatures have a negative impact on GDP. The second thing is that we know that the temperature is going up, because we can look a past CO2 levels and correlate that with temperature. In other words, you should take these results very seriously.

I tend to think there is reason to doubt the paper for being too optimistic, as it is based solely on temperature effects and does not attempt to include rainfall pattern changes or ocean acidification - both of which are undoubtedly going to be a consequence of increasing CO2, even if it is difficult to judge their exact regional effects at the moment.

The other thing about the paper is that it does give some useful indication that, indeed, it is the poor, equatorial countries which are going to suffer most, including the huge (and poor) population of India. The Pope is right to cast it as a global social justice issue.

The sort of simple relationship the paper finds about temperature rise and productivity across a range of countries might also be a useful counter to the fanciful pro-development at all costs call of the lukewarmers that India and China need to burn all the coal they can now to raise their people out of poverty, as if airconditioning is the cure-all for climate change.

Economics is a study of human behavior. Any differences in temperature in modern times is not perceptible to humans therefore a non-factor in economics. That's the funny thing about the warmist's position; .06 degrees in a decade and the sky is falling.

The effects of scaring or placating humans maybe. I could believe the effects of the position of Sagittarius on GDP before swallowing this argument on global warming.

Peter wrote:
"Economics is a study of human behavior. Any differences in temperature in modern times is not perceptible to humans therefore a non-factor in economics. That's the funny thing about the warmist's position; .06 degrees in a decade and the sky is falling."

The 30-year trend is 0.16 C/decade. You should try to get your numbers right.

The difference between the glacial and warm period of an ice age is about 8 C. So, even if the current trend simply continues, we'd see 20% of an inverse ice age in a century. Just one century. That's warming 30 times faster than when the Earth left its last glacial period.

Maybe it looks like no change to those who live in nice air-conditioned houses and offices. But there are billions of poor people in the world who do not live like that, and they are the ones being hurt.

Great to see this post found really understanding about global warming, I get another blog related to Global Warming News which have almost every news links for global warming.