The Charade of Credibility Is Gone 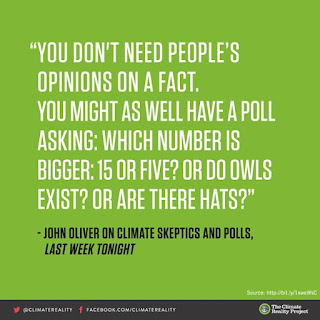 Seems Steyn thinks -- in his endless quest to raise more money for lawyers -- the latest outrage -- outrage I tell you! --  is that this is a problem, which I wrote three years ago:


I think their crimes will be obvious in about a decade.

When I profiled Michael Mann for Scientific American, he said he thought it would eventually be illegal to deny climate change. I had doubts about that, but maybe.

As it turns out, this all came to fore much faster than I expected, and perhaps for you, too, with the revelations that Exxon was fully cognizant of climate science for decades, but pretended otherwise for the sake of money money money.

Steyn can rest easy though -- no one will be coming after him. Or the likes of Anthony Watts -- who I still think will apologize for his denial before he dies. (His heart just isn't in it anymore.) They don't matter to the debate -- personal slanders excepted -- and that debate, wide and global, is over. With temperatures this year far ahead of the 1998 El Nino, by 0.15-0.4°C, it's settled. It's overtaken them. It's proceeded in leaps and bounds, just since the last decade.

And now imagine the next decade from here.

And they know it, you know, and we know it, and we know they know it, even as they eke out the last book, the last check, the last post. At this point, denying AGW, just looks..absurdly silly. Read the comments on any WU-WHAT post -- the reasoning, if you can call it that, gets ever more desperate. This point has arrived faster than I ever expected....as the public begins to realize this, that the science was indeed right all along, that the scientists have been right for decades.

Sure, they might still get an interview from the likes of a Sean Hannity -- and tell me, what kind of alternate universe does someone live in where Rush Limbaugh and Sean Hannity are respectible, intelligent people?? -- or a little more money from the Heartland Institute. But the charade of credibility is gone, forever now I think.

Physics always wins in the end. People have been saying this for years. People who knew what they were talking about.

I'm sure glad I'm not taking up the banner against physics. Six months in a row now, HadCRUT4 has been the warmest for its month, in 150 years of monthly records.

With all the vitriol, i think deniers thought it was a fight to the death.
I have been adamant in my insintence on acience and calling out the comspiracy theorizing and blatant lies and hypocrisy.
But as soon as someone acknowledges reality, i am just glad, and have no intetest in beatimg up on them.
Watts, Mincton, Goddard and some others, i may be less forgiving, but it is possible none of them will ever admit being wrong

It was always a war of attrition ... with small wins, small losses, holding out until the scientific evidence became incontrovertible, until enough people had seen and understood the changing of the climate with their own eyes and brains.

That moment may be approaching.

1. The climate doesn't change?
2. Climate models are unreliable?
3. Man's impact on climate may be real, but small?
4. Various proposed CO2 reduction schemes shouldn't be tried, because they won't work?
5. Global warming and rising CO2 have done more good than harm?
6. Some climate research, such as Mann's "hockey stick", are based on bad science?

There's simply no agreement about what it means to "deny climate change". It sounds more like religion than science. Denying climate change sounds like denying Jesus. I do not want the church of climate change to prosecute the Galileos of today for heresy.

There's a similar weakness in that quote from John Oliver. He says something is a fact, as certain as the fact that 15 > 5. But, he doesn't say what it is that he asserts is a fact. That the climate changes? That man's activity contributes to global warming? That global warming causes more hurricanes? That climate sensitivity equals exactly = 3.0 deg C? He just doesn't say.

none of the above. It is refuting almost all evidence that Co2 is causing current warming and that it will continue to do so far beyond anything experienced in the holocece, and accepting or promoting uncritically any assertions that this is not happening or is not going to cause any significant problems for humanity or the biosphere.

tonylearns -- no doubt a lot of people would agree that CO2 is causing current warming, that it will continue to do so far beyond anything experiencd in the holocece, and that it will cause significant problems for humanity or the biosphere. And, I think many people would agree with your definition of "climate change denier" as someone who doesn't buy this entire package. However, that term doesn't adquately describe your meaning. A more precise term would be something "catastrophic-anthropogenic-climate-change-denier". [In German, this could be one long word :)]

There is an alleged 97% scientific consensus on climate change. E.g., a paper by John Cook conlcuded that 97% of climate scientists believe that the earth is warming and man's activity contributes to the warming. However, Cook's methodolgy did not address the amount of warming caused by man or whether that warming would do harm. So, someone would have to believe stuff above and beyond the alleged scientific consensus in order to avoid being a denier, per your definition.

(To make my position clear, I think Cook is a weasel. Not only was his study technically defecive, but he also presented it to the public as if it proved more than it actually did. He fooled a lot of people IMHO.)

The prior comment was from me
Cheers
David in Cal

David in Cal, you were duped if you believe the only evidence for a consensus (at least they don't spell it 'concencus' like they did when the talking point first was released) is the Cook paper.

Dano -- I know there was an old survey of only about 100 climatologists that purported to show a high level of agreement of the same things Cook supposed showed. Namely, the earth is warming and man's activity contributes to the warming by some non-zero amount. I used to have a link to this study, but that page seems to be gone.


Do you know of any studies demonstrating consensus on either:

Calling Cook a weasel is silly, He is an activist. the people who make ridiculous arguments against that 97% paper are actually weasels.

The most interesting research I know of that deal with the specifics you are brining up is Bert Verheggan's which shows around 90% of climate scientists think we will get really screwed if we don't mitigate C02 by a large amount soon.

No one has bothered to recreate the extremely labor intensive approach of the Cook paper, because the deniers all know that the results would not be to their liking. they learned their lesson with BEST and WUWT "revolutionary analysis of Urban heat Island, that seems to have been forgotten about.

No real study that I know of shows less than 97% of climate scientists acknowledging the greenhouse effect as being a key element of current warming.