A September paper in GRL by Sophie C. Lewis and Andrew D. King looks at hot and cold temperaure records in Australia for the last one and a half decades. Their conclusion:

which is a pretty large ratio. They emphasize (which should be obvious if you think about it)

"In a stationary climate, the probability of setting new temperature records should decrease rapidly from the beginning of the sequence of observations."

Here's the graphical version of their results: 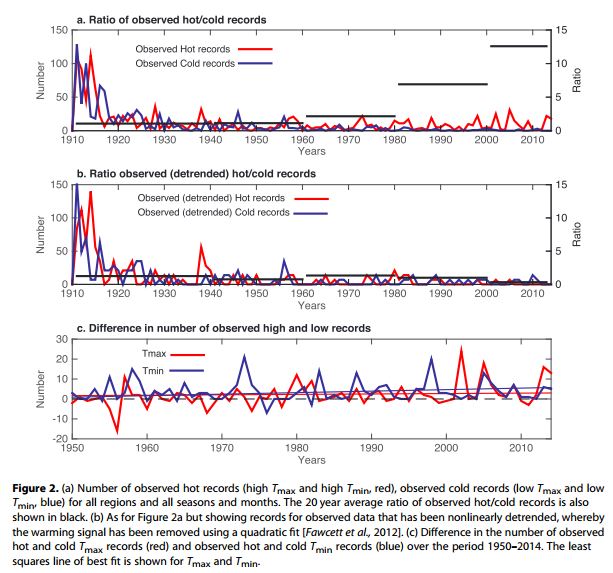 Finally, here are the temperature time series going back to 1910: 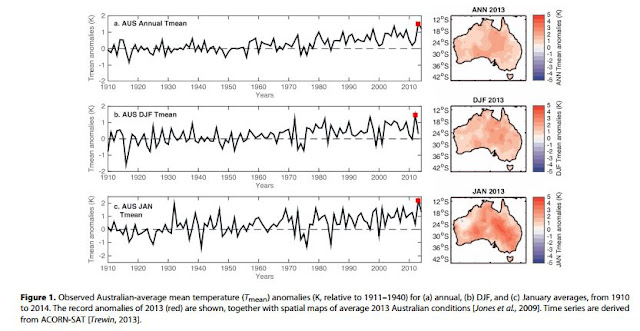 I understand the general prediction of climate change to be increases in extreme weather events.

Wouldn't that include low temperature records?

Do you mean that is not the general prediction of climate change science or that extremes of cold are not to be considered?

Do you mean more extreme weather events are not the general prediction of climate science or temperature lows are considered weather extremes?

The former. See the IPCC SREX Figure SPM.3 on page 7, in here:

From the IPCC report you offered: "Climate extremes, exposure, and vulnerability are influenced by a wide range of factors, including anthropogenic climate change, natural climate variability, and socioeconomic development."

Is there a misunderstanding or are we splitting hairs?

I don't understand what your question is.

It's not clear how that contradicts my point. It seems to support it.
Are you (and IPCC) saying, for example, that "frequency" means both increased or decreased frequency, depending on the other stated factors?

John: Seems it depends on the details. All I could do is quote from the IPCC SREX, so you should just go there and read for yourself. Thanks.