Some of the things I found interesting lately:

Bill Gates has committed $2 billion to development of new energy technologies to combat climate change. More in this article in The Atlantic.

Abe Streep went to Wyoming and spent a week talking to the people there about coal. It is, of course, lifeblood for Wyoming's economy, and you can't help but feel for a group of Americans who -- as has happened before here, with the steel industry and car industry -- see the coming death of their industry coming and the end of their well-paying livelihoods. They clearly realize, whether all of the admit it or not, that climate change is here and the issue isn't going away (despite the best efforts of the climate thugs). At the same time, though, some of the things Streep hears from people there are just insane -- that Obama is the Antichrist, that he's a Muslim, that he's trying to kill coal for the sake of billionaire backers who are invested in solar energy.

The Hadley sea-surface temperature for September was the warmest (most anomalous) in their records, which start in 1850. It was a huge 0.06°C higher than second place, which was just last month. The last five months are among the 6 warmest months in HadSST3's records; and 3rd place is only as far back as August 2014. 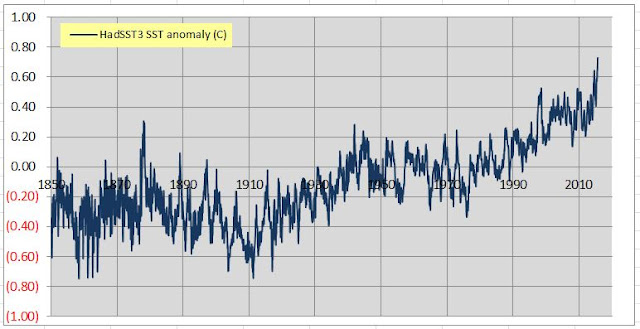 Aerosol forcings over the last 10-15 years wouldn't have explained the hiatus (which didn't exist anyway, a closer look at the data showed).

John Fleck says Lake Mead is forecast to drop even further in the new water year, by 5 feet.