Along side the recent paper by Zwally et al at NASA that finds the Antarctic continent is gaining ice (see here for some other opinions), a paper by Thomas et al just published in Geophysical Research Letters (here's the press release; the paper is open access) finds that snow accululation in the West Antarctic rose 30 percent during 20th century. And the same goes for the last 30 years -- an additional 5 meters, on average.


The last three decades saw more snow build up on the ice sheet than at any other time in the last 300 years.... Annual snow accumulation increased in the early 20th century, rising 30 percent between 1900 and 2010 and the researchers found that in the last 30 years of the study, the ice sheet gained nearly 5 meters (16 feet) more water than it did during the first 30 years of the studied time period. 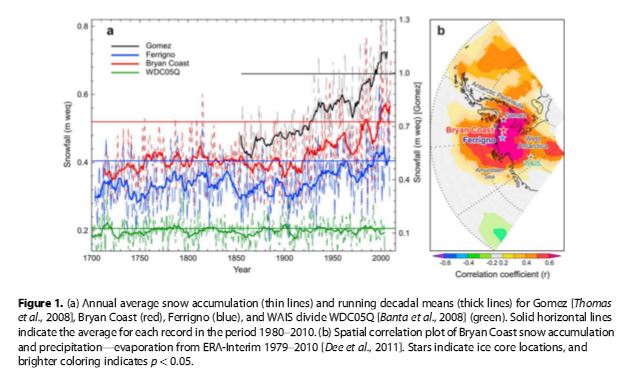 
Thomas attributes the higher annual snow accumulation over the last 30 years in part to an intensification of a regional low pressure system and more storms in the region. These storms could increase as a result of climate change, possibly leading to further increases in snow accumulation.

Thomas says: “In this region, the same storms that have driven increased snowfall inland have brought warmer ocean currents into contact with West Antarctic’s ice shelves, resulting in rapid thinning. Thus the increased snowfall we report here has not led to thickening of the ice sheet, but is in fact another symptom of the changes that are driving contemporary ice sheet loss.

The results come from two ice cores from Ellsworth Land, the strip of land that connects the Antarctic Peninsula to the rest of the continent. 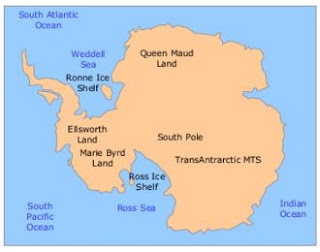 Props to you, David, for linking to this article. Over the last 20 years there has been justifiable concern about the dramatic drop in Arctic sea ice extent. However, there has been less focus on the incease in Antarctic sea ice extent. The increase in the Antarctic was almost as large as the reduction in the Arctic. The obvious implication is that, although global warming is affecting polar ice, there appear to be other significant factors as well.

1) People are more concerned about Arctic sea ice loss than Antarctic sea ice gains, because it's much closer to us and has more potential to affect northern hemisphere and regional weather, jet stream. (90% of the world's population lives in the northern hemisphere.) On the other hand, Antarctic sea ice is in the middle of nowhere. The Arctic affects the NH more in terms of potential changes in the AMOC, and economically in terms of ship passages, oil drilling, etc. And people live near the Arctic Circle, so the melting there affects them in a way that Antarctic sea ice increase doens't affect anyone. The Arctic has also been studied much longer, and there's data going back a hundred years on Arctic sea ice to compare to.

2) This article I wrote about isn't proof against AGW, though I expect some are going to try and claim it is.

3) I don't see people ignoring Antarctic sea ice. Its expansions looks to be due to changes in winds:

This year, Antarctic sea ice is way down from last year, perhaps due to the El Nino. But it's simplistic to say that the Antarctic gains are cancelling out Arctic losses, because the Arctic and the Antartic are very different places with very different geographies. Also, the trend in global sea ice extent in the satellite era is in fact -30,000 km2/yr.