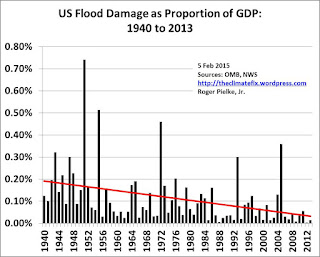 And that is indeed what you get if you take the NWS's data on annual flood damage and divide it by inflation-adjusted GDP.

But the problem with this simple calculation is that it ignores all the money spent to reduce or prevent flooding -- dams built, rivers dredged and rerouted, streams widened, rip rap installed, house and town relocations, etc.

This has come up on his blog before, and I also heard it from an NCAR hurricane expert I talked to a few years ago at a summer workshop in Boulder. Until you include this spending, you don't get an accurate picture of the true cost of flooding. I don't suppose the latter amount is easy to calculate though, but it may exist somewhere.

And how do you factor in better forecasting and better telecommunications, and the cost of establishing that? The years have seen great improvements in weather forecasting, and better communications mean people have gotten more and more accurate warnings over the years. (Lack of good forecasting and communication was a big factor behind so many deaths (682) in the 1938 New England hurricane.) Some amount of the immense spending by the US on installing radar systems and launching and operating satellites has to be counted too, in lieu of flood losses.

Buildings are constructed better, too. A brick house may survive a flood today whereas a wooden house of 50 years ago wouldn't have survived the same flood. Brick houses cost more.

In short, that's what civilization does -- it provides ever more security via planning, management and technology. But all that isn't free.

These criticisms apply to many such graphs Roger promotes -- hurricanes, for example. But it seems to me especially for flooding. Roger acknowledges some of the complications -- see the next paragraph -- and gives some other one, but this graph in particular is simplistic and misleading.

This is from Downton and Pielke Jr, Natural Hazards (2005):

Accounting for the costs of disasters is inherently complicated for three reasons. First, disasters have direct costs, such as the destruction of a building, but also indirect costs. For example, a community may see property values decrease in years after a disaster and experience a corresponding loss of property tax revenue. Disasters also have direct and indirect benefits, such as when a community receives an infusion of disaster relief funds that pours money into the local economy (cf. Changnon, 1996; Pielke and Pielke, 1997). Second, a disaster’s losses are a function of the spatial and temporal scale that the analyst chooses as the focus of a particular loss analysis. For example, federal disaster assistance shifts some of the losses from the local economy to the federal government; and, for more than 100 years the sea wall built after the 1900 Galveston hurricane has provided benefits in lives saved and losses avoided in subsequent storms. For the same event, analysts can develop equally rigorous analyses of losses that differ a great deal (cf. Guimaraes et al., 1993). Finally, many losses (and benefits) associated with a disaster are intangible. For example, widespread damage to agricultural land that results in crop losses can affect commodity prices and thus necessitates a counterfactual argument (i.e., what would commodity prices have been without the event) in order to estimate the economic losses associated with the crops that never went to market. Thus, the true costs of disasters include hidden costs and benefits which are difficult to identify and quantify.

I don't think the data shows that flood losses are getting better, either. The reduction in cost is likely due to better infrastructure construction.

Some people (through ignorance or partisanship) automatically blame every natural disaster on climate change. Greenpeace has even blamed climate change for earthquakes. Refutations of this POV are useful.

"Some people (through ignorance or partisanship) automatically blame every natural disaster on climate change."

It is not binary.

All weather events know include an anthropogenic component.

Greenpeace has even blamed climate change for earthquakes.

They may not be wrong:

When vast icebergs break off at the end of tidal glaciers, they tumble in the water and jam the glaciers themselves backwards. The result is a seismic event detectable across the Earth.

“These are all around magnitude 4.6 to 5.2, they’re all pretty close to magnitude 5,” says Meredith Nettles of the Lamont-Doherty Earth Observatory at Columbia University, a co-author of the study. “Which is a pretty big earthquake.”

Granted, these earthquakes aren’t caused by faults – they’re caused by massive movements of ice and how those impact the ground beneath. Compared with the early 1990s, Nettles says, scientists are now measuring seven times as many of these glacial earthquakes coming from Greenland — the rate has shot up as the ice sheet has begun to lose more mass from the calving of icebergs at the front end of glaciers.

Less Glacial Pressure, More Earthquakes and Volcanic Eruptions
Ice is extremely heavy—weighing about one ton per cubic meter—and glaciers are massive sheets of ice. When they are intact, glaciers exert enormous pressure on the portion of the Earth’s surface they cover. When glaciers begin to melt—as they are doing now at an increasingly rapid rate due to global warming—that pressure is reduced and eventually released.

Geologists say releasing that pressure on the Earth’s surface will cause all sorts of geologic reactions, such as earthquakes, tsunamis (caused by undersea earthquakes) and volcanic eruptions.

"What happens is the weight of this thick ice puts a lot of stress on the earth," said Patrick Wu, a geologist at the University of Alberta in Canada, in an interview with the Canadian Press. "The weight sort of suppresses the earthquakes, but when you melt the ice the earthquakes get triggered."

Writing in New Scientist magazine, Bill McGuire, professor of geological hazards at University College in London, said: "All over the world evidence is stacking up that changes in global climate can and do affect the frequencies of earthquakes, volcanic eruptions and catastrophic sea-floor landslides. Not only has this happened several times throughout Earth's history, the evidence suggests it is happening again."