How Climate Change is Making the Houston Situation Worse 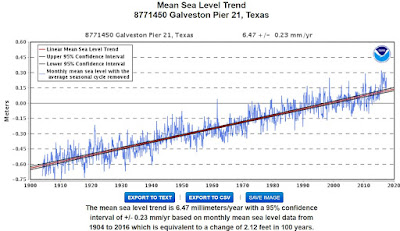 One way climate change is certainly making the Houston flooding is because because sea level is rising. That increases the height of storm surges and brings more water inland.

"Exacerbating the situation, said Hal Needham, a storm surge expert and founder of the private firm Marine Weather & Climate in Galveston, Tex., was that the storm surge elevated Galveston Bay, blocking drainage of the rain that pummeled coastal and inland areas."

Galveston, which is a barrier island, has seen 0.75 meters of sea level rise since 1900. Much of that is due to the island’s subsidence, but sea level rise is making this worse than where the land isn’t sinking. And, with small-slope beaches and relatively flat land, the inland extension of the water is increasing too.

And the storm surge of a hurricane is much more dangerous than the winds.

According to a 2013 article in the Houston Chronicle


A 2007 study underwritten by the city of Galveston that anticipated rising sea levels would cover the coastal highway on the west of the island within 60 years appears to have been overly optimistic.

The $50,000 geological hazard report was prepared for the city by geologists from the University of Texas, Rice University and Texas A&M University but then shelved. The report based its calculation on historic sea level rise and failed to include climate change. Sea levels are rising much faster than previous estimates that accounted for climate change, according to reports released in December by U.S. government scientists and in November by the World Bank.

So right there is an example of how political influence in a climate report (which is why I assume the Texas university's report left out climate change) is dangerous.

A 2016 article from the Houston Chronicle about the land subsistence shows that it is large all over the region.


Parts of Harris County have dropped between 10 and 12 feet since the 1920s, according to data from the U.S. Geological Survey.

State and local officials have made various efforts over the past 40 years to stabilize the ground, but some areas continue to sink - by as much as 2 inches per year.

And why is this happening? Humans. People are drawing too much groundwater out of the aquifers, and the land above is sinking.


There is little mystery to why this is happening: The developing region draws an excessive amount of groundwater to keep itself quenched. Over the last century, aquifers here have lost between 300 and 400 feet, leaving the land to collapse.

The science behind this phenomenon is called subsidence.

Houston sits in one of the nation's largest subsidence bowls, so-called because of the crater effect that happens when the ground caves.

Since the 1920's the ground level in areas around Houston have dropped up to 12 feet. The Houston Chronicle lays out the historic effects of subsidence and flooding in an article in 2016. And yes it was due in large part to human activity.
http://www.houstonchronicle.com/news/houston-texas/houston/article/For-years-the-Houston-area-has-been-losing-ground-7951625.php