Getting Ready for the Eclipse 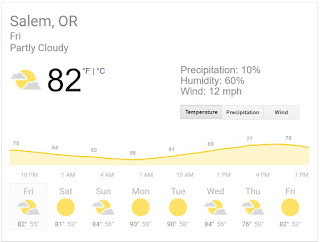 The eclipse is only two and a half days away, and the weather forecast for Salem, Oregon is looking good for Monday.

My biggest stressor is that my sister and her family are coming down Sunday morning -- they're saying traffic is going to be a serious mess -- and they'll tent in my back yard. (I only have one bed. But at least I arranged to turn off the 5:15 am water sprinklers.) It's stressful because, let's just say, her and I have different standards of housekeeping. So I'm trying to clean up things I should have cleaned up months ago. This is actually what worries me the most about this grand celestial spectacle.

We're going to watch the eclipse from a park just across the street. Here, the Moon starts to obscure the Sun at 9:05:25 am PDT, and totality begins at 10:17:21 am PDT. Totality here lasts for 1 minute, 54 seconds.

I haven't detected any increased traffic here yet, despite some claims I've read around the Internet that grocery store checkout lines are out the door. They are not. But people are already arriving out in the sticks of central Oregon. Those poor small towns just aren't prepared for an influx of visitors -- an Oregon tourist administrator told me that they're expecting one million people to travel into the path of totality, a 25% increase in the population of the state. Salem is allowing people to sleep in its parks, no permit required. My sister is hoping to beat traffic by coming down Sunday morning, when hopefully the traffic won't be too bad, and they'll try to get home Monday evening. I hope we don't have an argument about housekeeping.

I wrote a couple of blog posts for Physics World magazine: "America counts down to the big eclipse," and "The American eclipse: wonder, science and festivities." There are a lot of eclipse-related activities going on here and in Corvallis (and elsewhere across the U.S.), but I'm wary of traffic. Truth is, I'll be happy if there are no serious discussions about the housekeeping. (Hey, she has a maid who comes in weekly to clean!)

I'm not planning on taking any pictures. I may shoot a couple with my iPhone at totality, without any filter, but there will be pictures galore. I'm more interesting in how the eclipse will feel, how the temperature will drop, winds pick up, and the general strangeness and grandeur of it all.

I've been looking forward to this since I first learned of it six years ago. I have this picture in my head, surely not realistic, that it's going to be a massive bacchanalia, something like the 5-year end-of-the-world party in Ian Banks' The Hydrogen Sonata.

Our friend Jim reports that his group was evacuated from Cold Springs Campground, then 3 Creek Lake Campground the next tnight, but found refuge in a campground half way up the Metolius. Conditions west, south, and east of Mount Jefferson were very smoky. But they had a great hike up Broken Hand from Tam McArthur Rim and 3 Creek Lake. Jim said the vista of Mount Washington, Three Fingered Jack, and Mount Jefferson, with the Milli and Wychus fires billowing clouds up over 16,000' looked like the plains of Mordor, with Minas Tirith, Cirith Ungol and Mount Doom on the horizon,

Sounds like Jim is having fun. I hope the sky is clear for him tomorrow morning.