NOAA has released the 3rd quarter ocean heat content data (thanks JHC) -- the best measure of the planet's energy imbalance -- and there has been a lot of cooling, at least in the top half of the ocean, compared to three months ago. 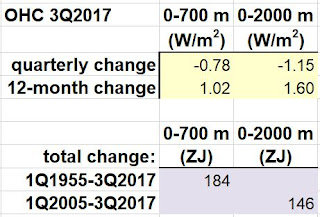 Clearly this means AGW is over. Perhaps this is why UAH and RSS both showed a record high for the lower troposphere for both September and October, and, for RSS, August as well. (UAH LT had the third warmest August.)

Here are the graphs. 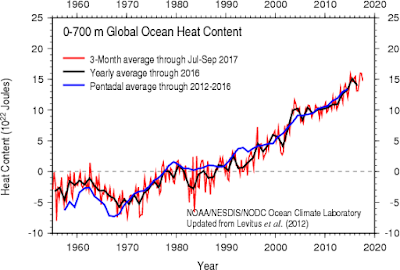 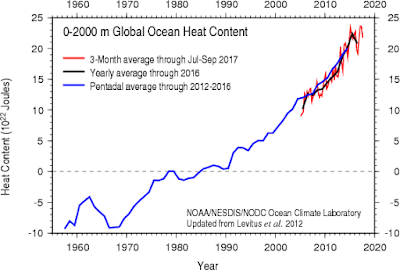 (The graphs with error bars look...weird.)

Finally, the acceleration of the top half of the ocean (0-2000 m) is dropping, but still positive: 0.038 ± 0.019 W/m2/year. But my uncertainty doesn't include autocorrelation, which clearly the ocean has in abundance. Maybe I'll work on that later.

1. What change in water temperature is equivalent to a given change in heat content? That is, can the change in joules in a given volume of water or W/m^2 be converted into a change in temperature?

2. Heat content seems to have a regular oscillation, based on the chart. Is it possible that the drop in heat content is just normal seasonality?

climate data analysis said...
This comment has been removed by the author.
5:03 AM

There is a seasonal cycle in the 0-700m OHC data. Relative to the long-term upward trend, it tends to be slightly higher in 1st and 4th quarters, and lower in 2nd and 3rd.

This is very roughly what one might expect from the fact that most of the ocean is in the southern hemisphere, but the details aren't perfect. The means of residuals for 2nd and 3rd quarters are very similar, whereas I would expect 3rd quarter to be lower than 2nd.

It's heat that matters here, not temperature.

Ocean heat content shows a long-term increase, with less noise than for the surface or tropospheric trends.