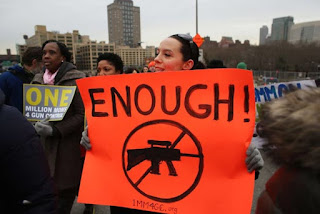 Yesterday, for the first time, I donated to a gun control group, the Coalition to Stop Gun Violence, a group of 48 good organizations with a common goal I support.

And I will donate again, in a few months. We can whine and whinge all we want, and we do (me included), but the only thing that's going to stop these shootings is making craven, corrupt politicians more afraid of the gun control crowd than of the NRA.

At the very least, assault rifles have to be banned (again). With harsh penalties for anyone who owns one or sells one -- years in prison. These weapons are designed only to kill as many people as quickly as possible, and no citizen needs one or deserves one. Even the Second Amendment, like all rights, must have its limitations.

Ultimately the Second Amendment must be repealed, as Bret Stephens wrote about last month in the New York Times. It had a purpose at one time in this country's history, but that purpose is now long gone, and the judicial branch has badly misinterpreted it. And completely ignored the phrase "self-regulated."

Here's something I learned recently: while the term "militia" appears in the 2nd amendment (with the most disastrous comma splice in history)


A well regulated Militia, being necessary to the security of a free State, the right of the people to keep and bear Arms, shall not be infringed.

the word "militia" also appears in several other places in the Constitution, and its use there makes it clear that the "militia" has a purpose, and its use clearly does not mean all citizens of the US. For example:

Under Section 8:
The Congress shall have Power To...

15. ...provide for calling forth the Militia to execute the Laws of the Union, suppress Insurrections and repel Invasions;

16: ...provide for organizing, arming, and disciplining, the Militia, and for governing such Part of them as may be employed in the Service of the United States, reserving to the States respectively, the Appointment of the Officers, and the Authority of training the Militia according to the discipline prescribed by Congress;

Under Section 2:
1: The President shall be Commander in Chief of the Army and Navy of the United States, and of the Militia of the several States....

Clearly "militia" means an 'organized, armed and disciplined' organization, and not just anyone.

The ownership and use of extreme firepower has unfortunately become a fetish, one of the ways some people make a statement about who they are, who they aren't, and who their people are. They're part of a tribe with certain attributes -- gun ownership of no matter what kind, climate denying, economically shut out and angry. Of course, I'm part of a (different) tribe, but I feel for their plight -- I grew up among them, in the mountains of rural Pennsylvania. Back then everyone on our ridge was a Democrat who belonged to a union. Then the steel industry collapsed. My dad, who had worked in a steel mill since his early 20s, moved our family 50 miles away to a different steel mill, and then 2000 miles to Albuquerque to yet another steel mill. My uncle lost a well-paying job in a mill near Pittsburgh, and became a bartender. Eventually everyone divorced.

But last November, 64% of Westmoreland County voted for Trump.

Unfortunately I don't see America solving its gun problem. The gun crowd is too useful to the GOP, whose votes that party wants but who then screw them over ever chance they get. But they got their guns! And we are too violent of a country -- led by the militarism and violence of our own government, home and abroad -- and too inured to that violence. Our educational system is failing to educate many, and entire classes of people are being left behind economically, with no one being seriously interested in addressing the problem. And the GOP's tax machinations will only make this worse.) Most of our politicians are cowards -- including Hillary, who bone-headedly called them "deplorable" -- and even they must know "thoughts and prayers" sounds ridiculous at this point. But everyone lies and is afraid to say what they're really thinking, because they might lose power or lose the next Supreme Court seat.

The US is in a long-term decline, and we all know it.

I'm not sure where exactly it falls from here, but guns will probably have something to do with it. It won't be pretty -- and isn't already.

I've been trying to drop hints to my nephew and niece -- now 13 and 10 -- that their world is changing (though I haven't gotten too much yet into how, or how bad), and that they should prepare themselves -- that in their lifetime they may well find more and better opportunities abroad, and a better, safer, more healthy life, and they should learn all they can about the rest of the world, about everything, and learn a language that will be useful -- perhaps Mandarin.

I'd also like to see the US split up -- really. I don't see why I, living in the blue part of Oregon, should be subject to the backward values (as I see them) of the south, of extreme so-called Christians, of politicians who pass more & more extreme gun rights laws, even in the face of mass shootings, as they did after Newtown. I am not going to live in a society where guns are as ubiquitous as the old West.

I believe that smaller is beautiful -- that we each have more power and influence in much smaller entities -- towns, states, countries -- instead of the huge country we live in now when one's vote feels useless and no federal politician care about our values and hopes and opinions. The only times I've ever felt remotely connected to my government was when I lived in New England, and received phone calls from my representatives in the small states of Vermont and New Hampshire. They really wanted to talk, or at least listen for 10 minutes. One guy in NH, who wasn't even my rep, talked with me for an hour about an email I sent him regarding his position on an arcane matter of where on the Piscataqua River the NH-Maine border lay -- in the middle, or on the northern bank. (I no longer remember my position on the matter.)

So let's split Washington and Oregon in two, bisected by the Cascade Mountains. Those on the left (in both senses) can join with northern Canada, and start the nation of Cascadia. Maybe British Columbia will join us, or maybe we can join them. Maybe I/we can have some hope for our country again.