With #COP23 here, some deniers are trying to play number games with carbon emissions, claiming that US isn't the problem in the world because it has reduced CO2 more than anyone else.

First, let's note that by trying to diminish the US role regarding CO2, they're implicitly admitting that CO2 matters. I suspect they know that, but have to then  dismiss it (viz. lie) for the sake of their audience.

The fact is, the US has emitted more CO2 than any other nation, by a factor of over two. And that emitted CO2 is just as much of a factor as are today's emissions -- in fact, they're more, since CO2's forcing changes slower than linearly with concentration. For example, the atmosphere now has 45% more CO2 (406 ppm on an annualized basis, as of October) than in pre-industrial times (280 ppm), but CO2's radiative forcing is 54% of its value when doubled.

Here are the data, from WRI's CAIT database (which seems to be offline at the moment). Through 2014:

As you can see, the US has emitted over twice as much CO2 as has China, and almost nine times more than India.

And you can barely detect any US reductions, there near the end of its line.

Here's another way of looking at it: the top 10 cumulative emitters, and how they compare to the US: 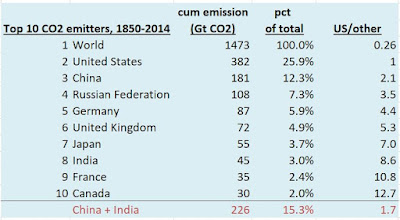 And I'm not even talking about per capita emissions here, which is the fair way to talk about emissions. (Some people seem to think that only country emissions matter, as if an American citizen has an inherent right to emit more CO2 than an individual Chinese citizen. That's just not ethical thinking.)

This can be broken down even further, per capita, which Damon Matthews et al did a few years ago: 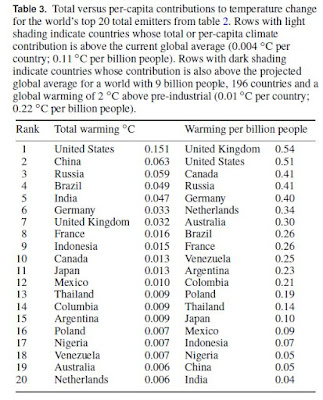