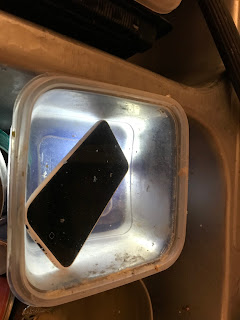 So this is strange. My iPhone 5c failed about three weeks ago -- it wouldn't boot up, just, when I tried to recharge it, would only show the Apple logo, then fail and try to power cycle again, endlessly. My battery was 3 years old and failing fast, so I took it to Batteries & Bulbs, but a new battery did not work -- they said my phone was broken. What do I know. So I went to Sprint and bought an iPhone 7, which is more or less the same, but the camera is noticeably better. And it has this strange "taptic engine" -- you feel clicks and scrolls in the hand that's holding the phone -- which I don't like and could do without. (The iPhone 8 has it too. Don't know about the X.)

I didn't want to donate my old phone anywhere, since all my data are still in it, so tonight I took the plunge (...) and flooded it in a container of water.

Immediately the flashlight turned on, and it's been on now for about an hour, while completely underwater. I didn't hit any buttons, certainly not the power button, when I submerged it. It just turned on and has stayed on.

Can anyone explain that?

Your old phone is signaling you that 3rd 1/4 OHC is out. -JCH

Thanks! for understanding my obsession.