The person I debated on the Lars Larson show last week said that there's been no warming in Oregon except for the urban heat island effect. He just claimed it again on a blog, though, as always, presented no data to support his claim.

So I'll present some data for him, showing that many rural sites in Oregon do in fact show warming. Not all, but most: 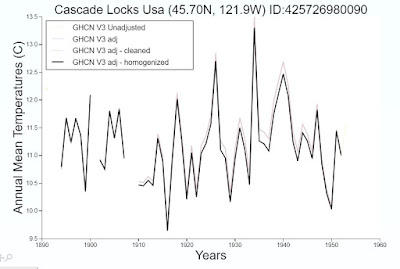 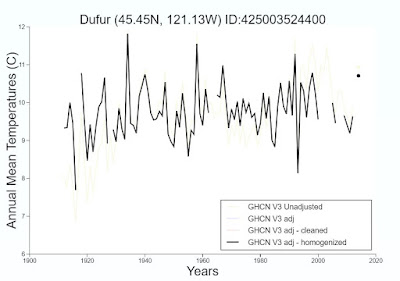 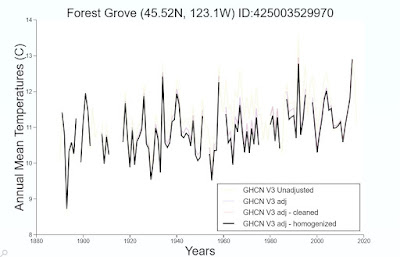 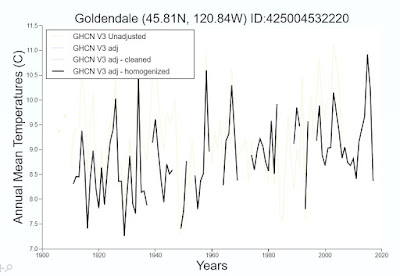 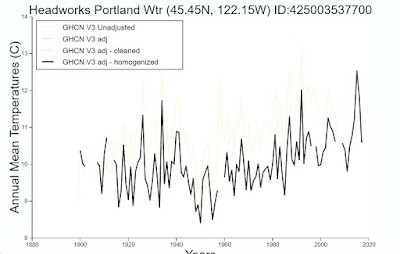 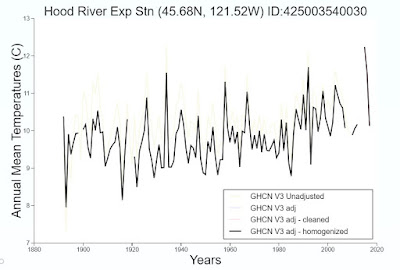 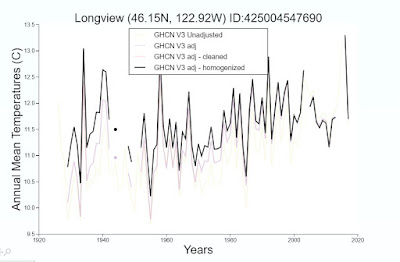 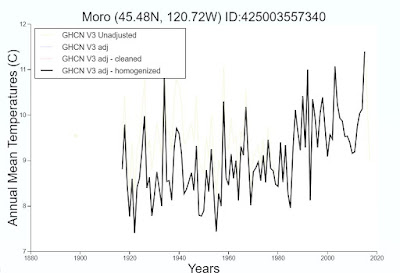 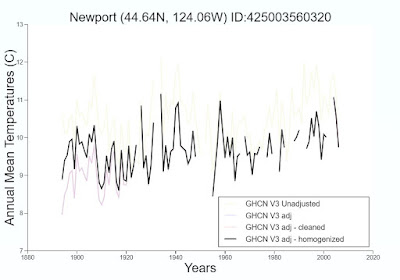 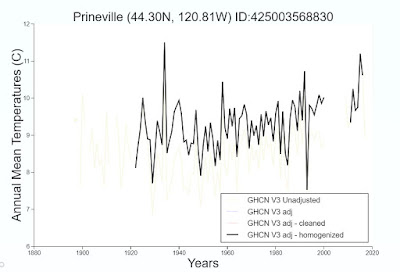 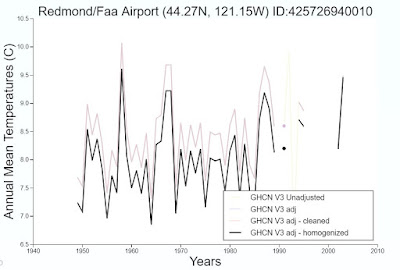 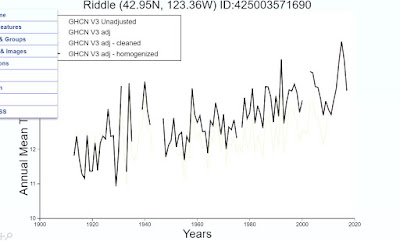 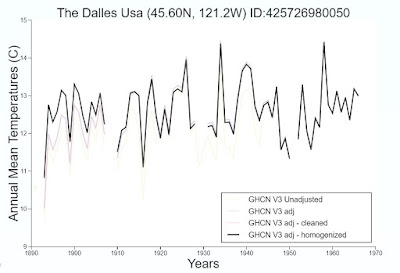 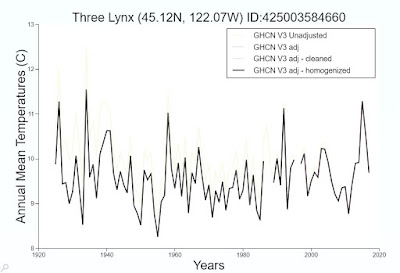 Adding some more, from around Oregon, Washington and Idaho: 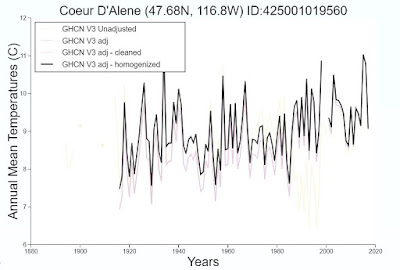 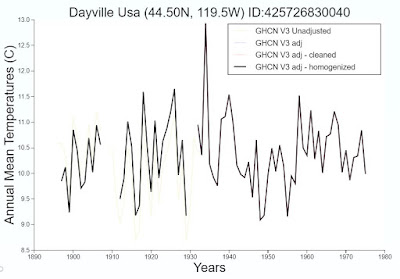 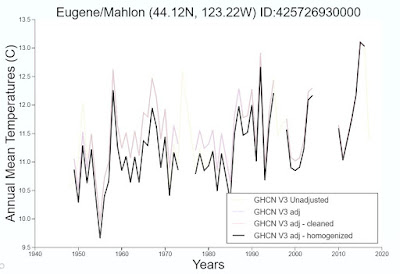 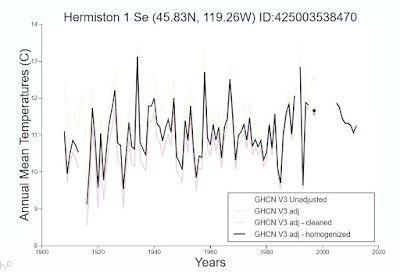 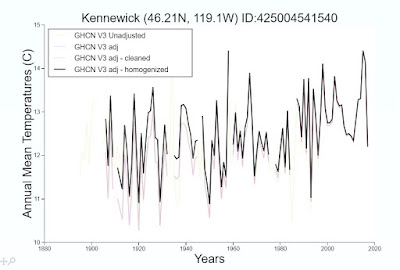 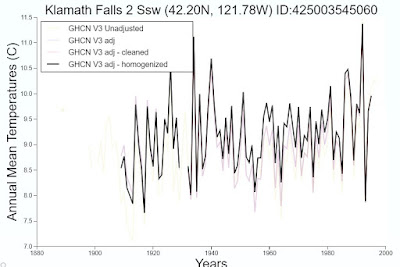 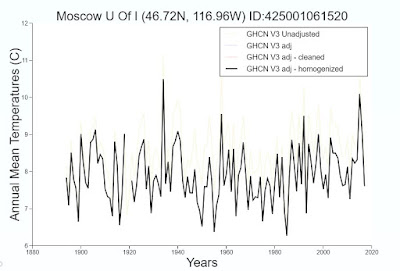 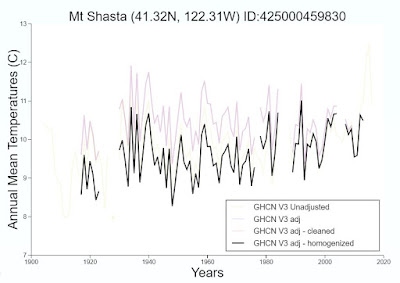 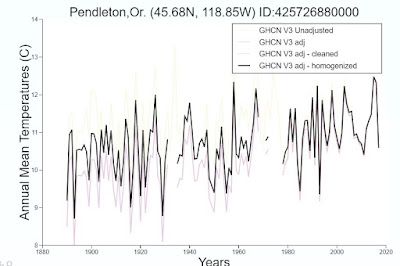 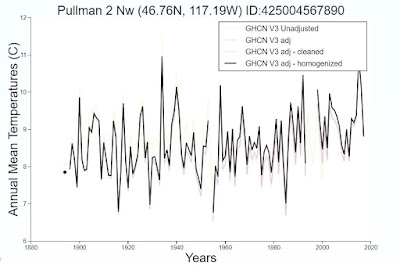 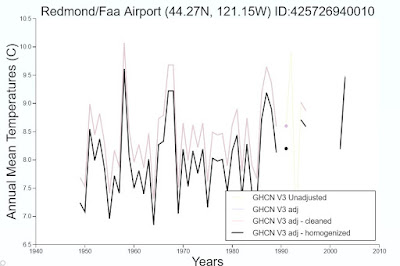 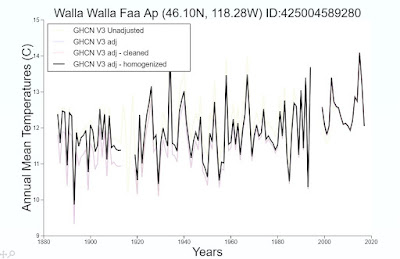 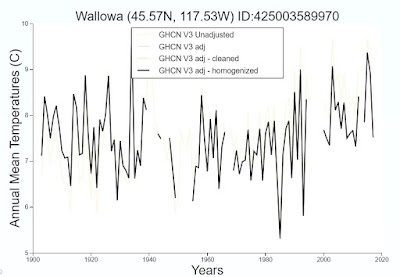 There's no doubt that the planet has warmed. But, mention of the Urban heat Island Effect reminds me that the adjustments made to US temperature records had the effect of increasing the rate of warming. I would have expected the reverse, in order to remove the UHIE.

IMHO omitting bad data is better than trying to fix bad data by some ad hoc means. I think it would be better to average annual changes in temperature, rather than taking the average of the temperatures. Then one could simply exclude any thermometer where the annual change in temperature was invalid, due to the UHIE, a change in position or any other other cause.

Rural stations show greater warming: "We identified which GHCN stations were rural and which were urban. Then we created global temperature time series from the rural only stations and compared that to our full dataset. The result was that the two showed almost identical time series (actually the rural showed a little bit more warming)"

but changes in instrumentation are the greatest factor: "Of significant note, the sign of the bias is counterintuitive to photographic documentation of poor exposure because associated instrument changes led to an artificial negative ("cool") bias in maximum temperatures and only a slight positive ("warm") bias in minimum temperatures."

Surface station record is consistent with satellite record (though satellite shows a slightly greater rate of warming) so we can have increased confidence in the results.

GISTEMP shows warming of 0.17C per decade since 1980 while RSS shows 0.20C per decade over the period.

Why was the early part of the Eugene Airport climate record adjusted downward to cooler temperatures. This is a first order climate station which should need absolutely no adjusting. David, what is going on here?

Layzej, we need a more complete answer. What changes at Eugene Airport require these adjustments to be made?

You're a meteorologist I take it? I'm not sure why you would look to a guy named "Layzej" if he needs a more complete answer. I'm just some dude from Canada. I would think a meteorologist would have better means than petitioning a blog?

But hey, I have access to the internet so I'll give it a whirl.

You've asserted that Eugene Airport station "should need absolutely no adjusting" - but you've provided no evidence for this assertion.

And the assertion rather ignores the station move in the 90's.

Eugene is a first order airport station with a reliable climate record compared with the coop sites which comprise much of the USHCN network. Many of the coop sites are poorly located and have suffered many station moves over the years. In addition, most of the coop sites suffer from extensive periods of missing data throughout their period of record. The Eugene climate record is virtually complete for the entire 78 year period of record. In addition, coop sites do not observe at midnight, so must undergo a time-of-observation adjustment which adds further uncertainty to their record. As a result I prefer to look at data from first order airport sites in addition to data from the US Climate Reference Network (CRN). We track day-to-day variations in temperature over Washington and Oregon as observed by the CRN here:

It's a pleasure to meet you Mark, and I'll be proud to add "researched station history for Washington State Climatologist" to my resume.