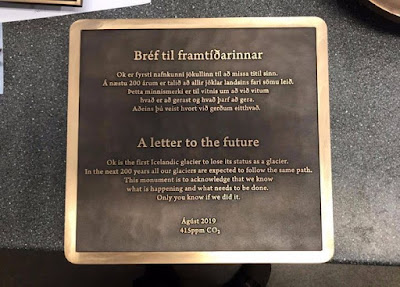 I wonder if this will become a thing. Researchers are going to put a plaque in Iceland memorializing the first lost glacier in that country.

It will be at the site of the now-extinct Okjökull glacier — nicknamed the “OK” glacier — in Borgarfjörður, Iceland. The hillside will be known as "Mt OK."

Deglaciation in Iceland occurs at a rate of about 40 square kilometers per year. Glaciers cover about 1/10th of the Earth’s dry land. Wikipedia says "The 13 largest glaciers [in Iceland] have an aggregate area of 11,181 km² (out of about 11,400 km² for all glaciers of Iceland).

Hey, that's 285 years worth of glaciers in Iceland. Nothing to worry about.