It's hard to believe that New Orleans could be inundated again just 14 years after Hurricane Katrina and subsequent fixes. If it's as bad it's going to raise questions of "when do you give up on a city," which might be the first city to face this of what will be many more this century. Surely New Orleans as a city won't be abandoned after this flood, but you have to wonder at what point another exodus occurs and at what point that feedbacks and causes more still people to leave. It's population doesn't seem to have yet fully recovered from Katrina, so clearly there was some feedback already: 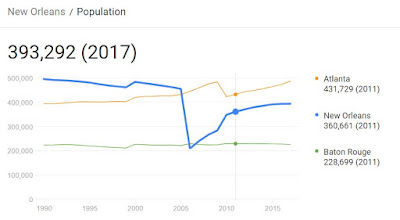 I found two sites which are recording the level of the Mississippi River in New Orleans, from weather.gov and the US Army Corps of Engineers. These screenshots are of the most recent results: 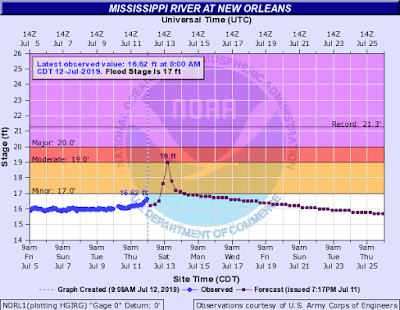 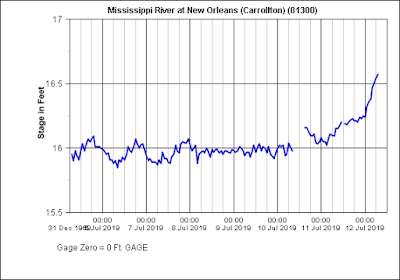 And here's a nice storm track.


Much of the area around New Orleans is now 1½ to 3 meters (4.92 to 9.84 feet) below mean sea level, according to a 2003 study by the US Geological Survey. Scientists found that the ground in the area was sinking at a rate of 1 centimeter a year.

That continual sinkage, combined with rising global sea levels due to the climate crisis, meant New Orleans would probably be between 2½ and 4 meters (8.2 to 13.12 feet) below sea level by 2100.