Yet Another Hockey Stick

There's another hockey stick in the scientific literature, this one from the PAGES 2k Consortium in Nature Geoscience. It used over 700 proxies from around the world and shows that climate is warming faster now than at any time over the last 2000 years. As Michael Mann wrote on Twitter, it re-re-re-re-re-...-re affirms the hockey stick, and we can add it to the list. Let's go to the figure:

Here's a different form of the results, presented in a phys.org news release:

More from the press release:


The results suggest that volcanic activity was responsible for variations before about 1850. After that, greenhouse gases became the dominant influence on global climate. By removing these influences in their analysis, the researchers also identified the magnitude of the random changes that cannot be traced to a specific cause. The team's data-based reconstructions also agreed with model simulations when evaluating these random changes.

As I've written before, it's easy to show that hockey stick is the expected result in the absence of significant natural forcings:
It'd be far more surprising is there wasn't a hockey stick in the last 2,000 years.

Added 5:10 pm - Here's a map and proxy count of PAGES 2k's network, from their Supplementary Information. In all they used "...nearly 700 separate publicly available records from sources that contain indicators of past temperatures, such as long-lived trees, reef-building corals, ice cores, and marine and lake sediments. The data are sourced from all of Earth's continental regions and major ocean basins." 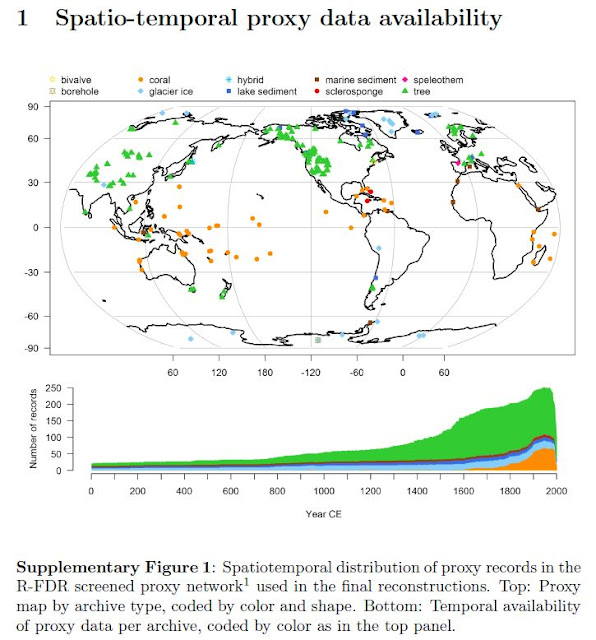 1. I do not believe there's any way to know how rapidly the planet warmed during some brief past period. How could we measure the rate of warming or cooling from, say, 1137 to 1187? AFAIK all we have a very few crude proxies, in a very few specific locations. Sop, none of the 700 models can be reliable. You can't get a reliable model by combining 700 unreliable models.

2. The first chart shows very rapid warming from shortly after 1800 to 1970 or so. This period was prior to the significant growth in atmospheric CO2. If this chart were reliable, it would imply that there was some natural warming (from 1800 to 1970) that was just about as rapid as the warming from 1970 to today. That would raise the possibility that much of the recent warming may have been natural, rather than anthropogenic. Fortunately I don't have to worry about this, since I consider the paper unreliable.

David: Using this source for annual CO2 values since 1850:

The forcing is logarithmic, so it changes fastest in the beginning.

DiC: I do not believe there's any way to know how rapidly the planet warmed during some brief past period.

Most proxies have yearly resolution. Why wouldn't they be able to capture warming over a decade? They seem to have captured the most recent warming just fine.

The first chart shows very rapid warming from shortly after 1800 to 1970 or so. This period was prior to the significant growth in atmospheric CO2

But we've had this conversation before and it seems this response was not convincing. Can you point out the gap in the explanation? I'd be happy to elaborate and happier still to learn something new.

I will do my best. Perhaps you can help me. It was my understanding that the IPCC regarded the effect of man on global warming to have only been significant since 1960 or so. The fact that warming follows the log of the CO2 in a certain range doesn't prove that it follows that it follows the log of the CO2 in lower ranges. There was a fear of global cooling in middle of the 20th century, which would not accord with the steady rise in CO2.

My impression is that there are only a small number of proxies in only a handful of locations. Is that wrong? Do you know where there's a list of proxies that are used for past temperatures? How far back do the proxies go? There can hardly be any trees still around that were alive 2000 years ago.

P.S. I happened to watch an educational TV show about the Vikings. The historian lecturing stated as a fact that it was warmer in Greenland when the Vikings had a settlement there than it is today. IMHO it makes sense to use all available information about the past.

Hi David. I added a map and graph of PAGES 2k's proxy network and proxy count. In all they used 700 proxies, according to phys.org.

They have several from Greenland.

PS: I don't think you're right that the IPCC says AGW started only in 1960. Do you have a quote or citation of that?

DiCA wrote:
"There was a fear of global cooling in middle of the 20th century, which would not accord with the steady rise in CO2."

Na. There was no consensus on global cooling in the '60s and '70s. Unlike today, it was a time before satellites were routinely providing loads of observational data, and scientists were not sure what was going on. A literature survey of that time period found there was no cooling consensus:

In fact, by 1965 plenty of scientists had already been warning about global warming from the buildup of greenhouse gases, and by the late '60s climate models were calculating the warming expected from CO2. List of some papers and reports here:

And scientists like Arrhenius, Callendar and Plass were calculating global warming from CO2 back to 125 years ago.

Layzej said...
This comment has been removed by the author.
8:29 PM

Here is the previous response. Please let me know if there are any gaps that can be addressed:

One thing I forgot when I mentioned above about the the TSI difference between today and the Maunder Minimum is that the 0.7 W/m2 was the difference at 1 AU. So it'd be about that at the top-of-atmosphere (TOA), but that gets reduced by (1-0.3) to account for the planet's albedo and then divided by 4 to account for the spherical, spinning Earth.

The Sun just isn't a big player in climate change. At least, in terms of its energy output.

David and Layzej - thanks for your responses. I do not intend to pursue this.