The Expanse season 4 is now on Amazon Prime. I watched a lot of it last night. It's very good -- humans have started to go through to Ring Gates to the many solar systems (1,700 it said somewhere) on the other side. Much of S4 takes place on an alien planet called "Ilus." The planet is too jacked-up to be representative of hard science fiction, which I prefer, but there are market considerations to be made.

At this point a lot has gone on in the previous three seasons -- you might want to watch a recap, which I didn't do but wish I had. By now there's a lot to remember and a lot of alliances and enemies to keep track of. I think the problem is, for me, that binging on a show's season in a day or two doesn't register the details inside me as does a week-by-week show where everything is doled out more slowly (it seems). Maybe it's the I'm just a dumb boomer (but only by a few years!) and will never quite think on Internet time. Maybe I just have a bad memory.

All the main characters are back, including my favorite, Camina Drummer, played by Cara Gee. She's now an OPA (Outer Planets Alliance) leader, who seems to have gotten a promotion this season to a central position. The Roci's Amos is as big a loveable, muscular, dead-eye golute as ever, who takes ever more responsibilities but never disappoints. At least not yet. (The Expanse is much less quick to kill off characters than Game of Thrones, for sure. Even some -- well, one -- of those who die, didn't really.) 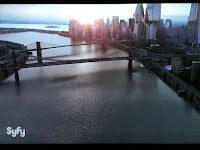 Events move pretty fast through the S4 episodes, and if you can watch only one episode at a time you're a better person than I am.

To finish, I'll comment finally on some of the quick transitional screenshots shown between scenes -- the large seawall around Manhattan (to the right), the even larger seawalls around Denmark, and a very quick shot of the southeastern US at night, showing Florida broken up into several islands. Is saving Manhattan really going to be as simple as erecting humongous steel walls along all its coasts and rivers, going up, for the Hudson, many miles I'm guessing? (Dozens of miles?) Alas, I'll likely never get to know.